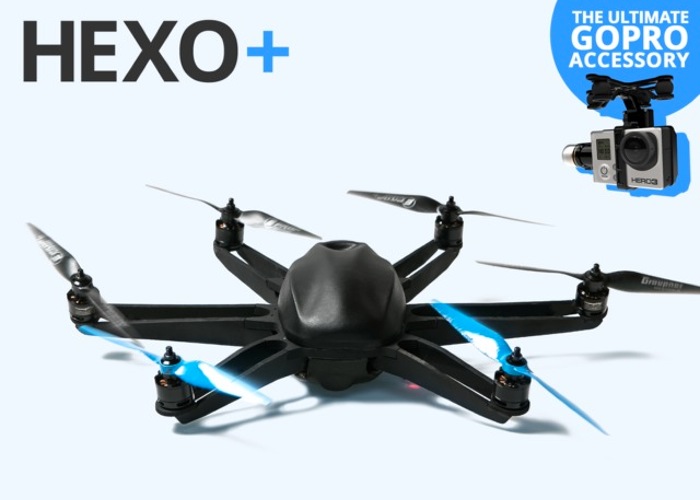 With still over eight days left to run on their Kickstarter campaign Squadrone System based in Palo Alto California has raised over $1 million in funding, from over 1,900 backers to help make their HEXO+ autonomous camera drone become a reality.

When launching their Kickstarter campaign the development team were aiming to raise $50,000 to help the project make the jump from concept into production, but has now surpassed that figure many times over. To learn more about the innovative HEXO+ autonomous camera drone watch the promotional video after the jump.

The HEXO+ can be controlled and configured using a companion application that is loaded onto either your smartphone or tablet device. The drone is compatible with both GoPro Hero3+ Black Edition or Hero3 White Edition action cameras and supports iOS and Android devices.

“We initially began thinking about HEXO+ because we needed a solution that would make aerial filming possible in the most remote places: on mountains, in the snow, and in all sorts of unpredictable situations that were quite a pain to deal with when trying to sync a drone pilot, a cameraman and a rider.

When we started toying with the idea, we realized that it had the potential to change the face of all kinds of aerial filming, making it dead simple. So we combined our expertise in action-sports movie-making, drone design and aeronautic software to create a drone capable of autonomously flying, filming and following, giving you access to amazing aerial shots with the bare minimum: a drone, a camera and an app on your smartphone. HEXO+ is just that – an intelligent aerial follow camera: no pilot, no cameraman, no headache.”

For more information on the HEXO+ autonomous camera drone jump over to the Kickstarter website for full specifications and more demonstration videos.