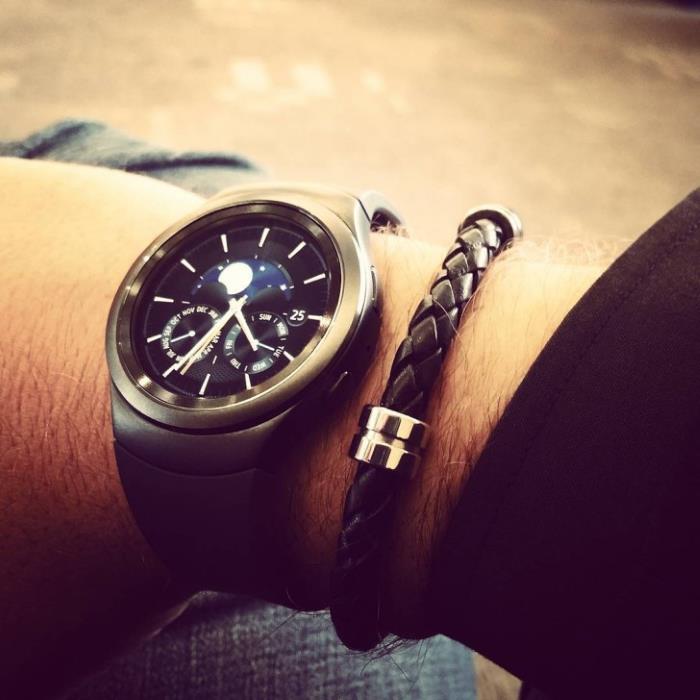 Samsung has officially confirmed that its upcoming round smartwatch, the Gear S2, will see the light of the day at IFA 2015 in Berlin. Since then, the company has posted some teasers, giving users a glimpse of what they can expect from the upcoming wearable device.

If it’s not enough, here’s a real life image of the upcoming Gear S2 smartwatch in all its glory. The image was posted on Instagram by Dennis Miloseski.

For those of you who don’t know, Dennis Miloseski is the VP of head of study at Samsung Design America, head of Samsung Mobile UXCA in charge of industrial design, design UX and overseeing strategy as well as engineering operations in North America. So, yes, the image you see above is totally legit.

Previous leaks suggest it will come with a 360 by 360 touchscreen display, a Exynos processor paired with 768MB of RAM, 4GB of storage, Bluetooth 4.1, GPS, an accelerometer, a gyro, a barometer, a heart rate monitor, a 250 mAh battery and will ship with Tizen operating system instead of Google’s Android Wear.

IFA 2015 is just around the corner, and we’ll make sure you get every piece of information from the big event.