Hasbro has launched a newly updated version of their Laser Tag gun game which now uses iOS devices to provide the mechanics behind the system using custom designed iOS applications. Once the Lazer Tag guns have been equipped with an iOS device running the Lazer Tag app, players can then enjoy either single or multi-player modes. Playing against either real life foes or virtual opponents. 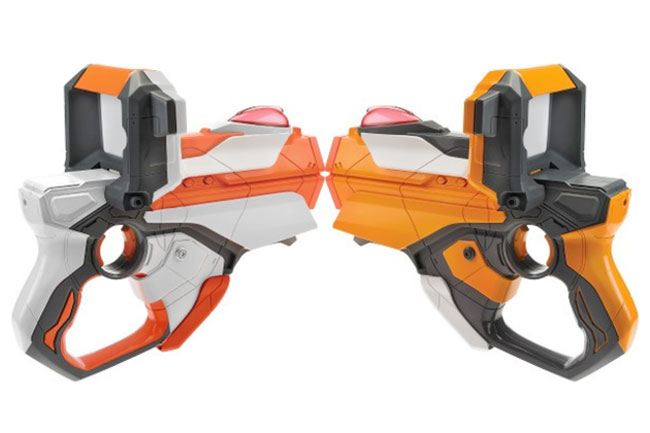 Each gun can fire its virtual shots over 250 feet and contains a Heads-Up-Display (HUD), which allows players to keep track of their gear and remaining power, while also providing a view of the augmented reality targets and enemies in the area.A virtual leader board keeps track of each players statistics and gaming profile. Keeping a log of your successful and not so successful missions.

“The on-screen Heads Up Display reveals virtual foes and targets in single-player mode and real-life worlds in multi-player mode, all while keeping track of remaining power and hits. Playing the LAZER TAG game as a single player allows players to use skill and strategy to master levels of increased difficulty, earning points and rewards along the way. Multi-player mode pits players against enemies in an epic competition where ability, energy and instinct rule. LAZER TAG blasters boast a virtual firing range of over 250 feet!”

The Lazer Tag system has been designed for players 8 years and over and a set of two guns will retail for around $70 when it arrives in early August 2012, and will support either an iPhone or iPod Touch device. Each blaster will require 6 AA batteries to power up.