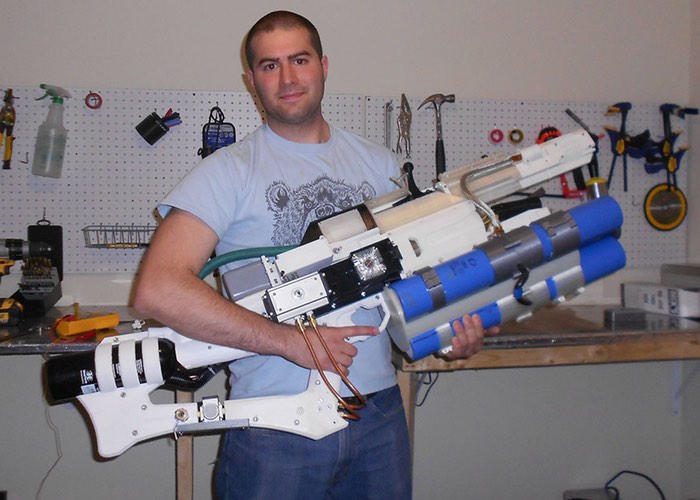 If you are looking for a project to keep you busy for the next few weekends you may be interested in a handheld DIY railgun that has been created by YouTube user ‘Xtamared’.

As you can see by the photo above the railgun is no small feat of engineering and is capable of firing aluminium or graphite projectiles at speeds over 250 metres per second.
An Arduino Uno R3 has been used to monitor the charging levels, temperature and other statistics within the rail. Watch the videos below to see the DIY railgun in action firing projectiles at different voltages.

The railgun uses 6 300J, 350V, 5500uF capacitors which combined weigh 20lbs and can deliver >1050V and 1.8kJ of energy to the projectile. Capacitors are first wired in parallel with flexible busbars inside of a 3d-printed housing. Busbars were custom made and are flexible 4AWG equivalent. Caps are held together in a 3d printed frame.

The frame includes the emergency discharge SCR, power resistor and button to discharge any leftover energy in the caps after a shot. The railgun’s electronics are based around an Arduino Uno R3 which monitors the capacitor voltage, amperage, temperature and battery voltage to ensure even charging and operation.

The 12V LiPo battery is first stepped up to 120V using a micro-inverter, then stepped up to 1550V through a transformer before being rectified. The high voltage rectifier gets quite hot so a heatsink was mounted on the outside.

For more information on the new DIYrailgun jump over to the Xtamared website for details via the link below. If you found this project interesting why not build your very own Arduino wind speed meter or anemometer to record the wind speed in your area.