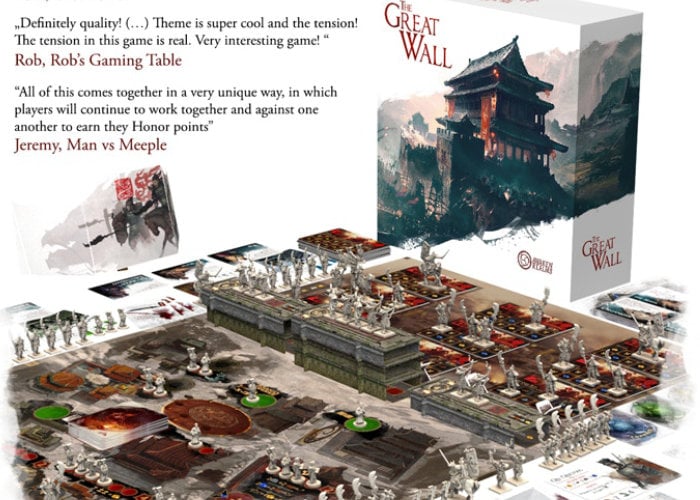 Awaken Realms has this month launched their 10th Kickstarter campaign for the new Great Wall board game set in ancient China, offering a Chance for players to build and defend the Great Wall in unique work placement Euro game style. Watch the video below for an overview of what you can expect from the gameplay from the 1-4 player game.

“The Great Wall is a new major board game from Awaken Realms (creators of Nemesis, Tainted Grail, Etherfields, and many other acclaimed products) and our fresh take on Euro / Worker placement type of Board Games! This fresh worker (and soldier!) placement game for 1-4 players faces them with many difficult choices and often pushes them to interact with each other. You will be assigning your workers to eleven different locations, such as Tea House, Quarry, Messenger Post, or Barracks, using special Command cards that have additional effects. “

“Production in locations activates ONLY when all their slots are filled with clerks, but filling them all by yourself can result in a penalty. On top of that, players can buy overseers who will give additional output every time a location becomes activated. This creates a lot of involving long- and short-term strategies. Players will take the roles of generals of an ancient Chinese empire who lead the defense against ruthless hordes. You will need to gather allied advisors, manage your workers, recruit armies and, together with other players, raise and defend the Great Wall! As the game progresses, you will often need to negotiate and interact with other players, but make no mistake – there can be only one winner. “