GoPro unveils a new digital video camera in October of last year called the HERO3+. The camera had a lot of really nice features including the ability to interface with a smartphone application to give the user control of a camera from across a room. GoPro makes a number of mount options for its cameras that allow them to be used for all manner of sports. 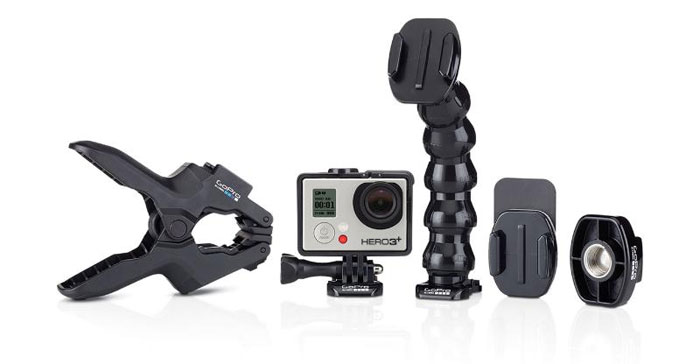 GoPro has announced a new camera package that is aimed directly at musicians who want to record their sessions or shows. The new package uses the same GoPro HERO3 camera that launched last year and comes packaged with several mounts that make it easy to get the camera mounted on stage or on your instruments. The new camera pack is called the HERO3+ Black Edition/Music.

The camera comes with mounts that allow it to attach to standard US size mic stands and to European size stands as well. The kit also includes adhesive mounts for attaching to instruments and other surfaces. The most interesting mount is a clamp that can be used in conjunction with other mounts available for the GoPro cameras. The HERO3+ Black Edition/Music will be available this spring for $399.99.