A few days ago, we mentioned that the Google Nexus 7 tablet was going to be launching soon at Verizon Wireless stores. The version of the tablet heading to Verizon supports the firms 4G LTE wireless network. The tablet is now available on the Verizon website and comes in a couple different price points. 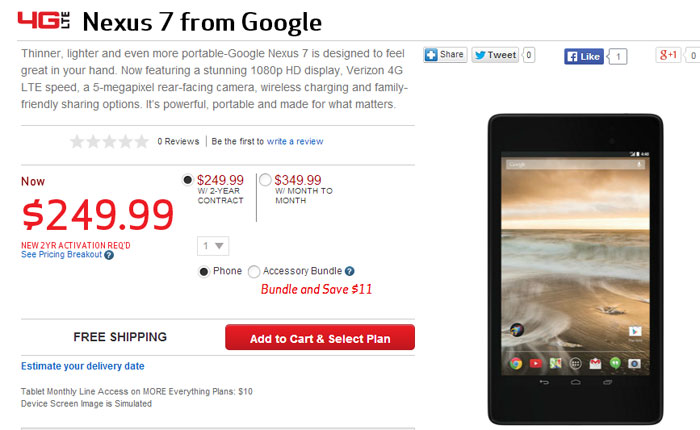 The tablet alone can be had for $249.99 with a 2-year data contract. If you don’t want a contract, you can pay $349.99 and get the tablet with a month to month deal for data access. The tablet will also be offered in versions bundled with some accessories. The accessories include a trio of screen protectors, a USB car charger, and a Chromecast device.

The price for the tablet with the accessories on a 2-year contract is $329.96. If you want to pay cash for the tablet and have no contract, you can get it for $429.96. The tablet uses Android 4.4 KitKat for the OS and has a 1.5GHz quad-core processor. The tablet also features 2GB of RAM and has dual band WiFi. The camera has a 5MP rear camera and a 1.2MP front camera.