Google [GOOG] has launched a new social networking service called Google Buzz, which is built into Google’s free email service Gmail. Buzz uses your Gmail contacts to build a social network and it has integration with Twitter, YouTube, Flickr, Picassa, Blogger to share stuff with your friends.

This is a pretty smart move from Google integrating the service into Gmail, as it has an already massive established user base to launch the new social networking service to. 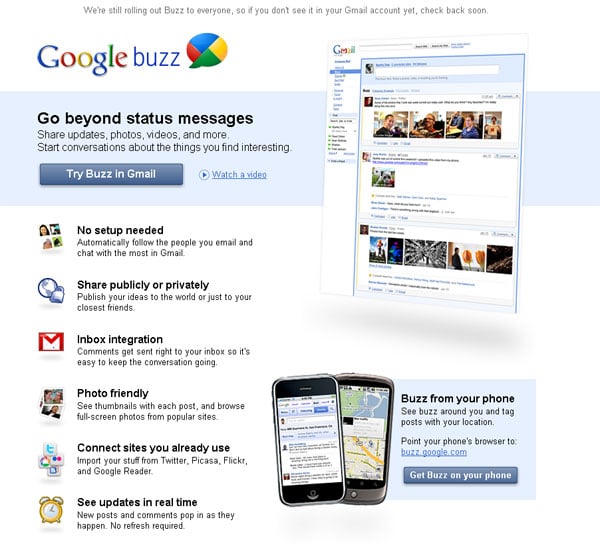 Google Buzz is a new way to start conversations about the things you find interesting. It’s built right into Gmail, so you don’t have to peck out an entirely new set of friends from scratch — it just works. If you think about it, there’s always been a big social network underlying Gmail.

The Google Buzz service automatically sets you up to follow your friends that you email and chat with the most on Gmail, and the service is designed to easily share information publicly and privately, and it integrates with your existing Gmail inbox, you can see what it is all about in the official Google video below.

Google has also made the Google Buzz service available from your mobile phone, so you can keep connected to the new social networking service on the go.

It will be interesting to see how popular Google Buzz becomes, I wonder if this will effect other social networking sites like Facebook and Twitter, and if we will see a large amount of users switch to Google Buzz.