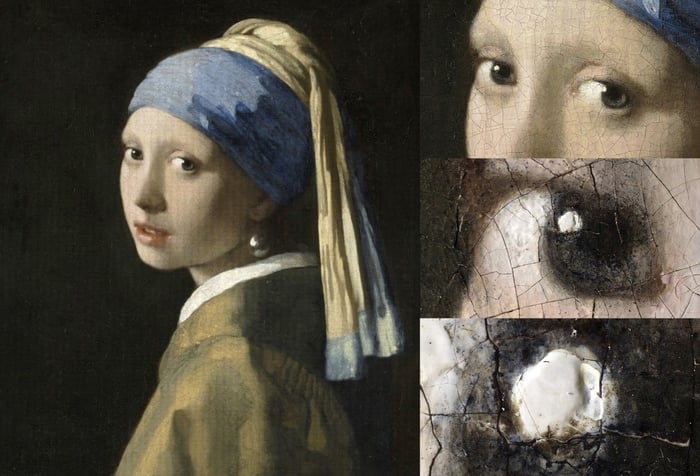 The iconic oil painting the Girl with a Pearl Earring, painted by Dutch Golden Age artist Johannes Vermeer, dated c. 1665, has been photographed and published online as a massive 10-gigapixel image. Enabling you to appreciate different layers and finer details of the painting thanks to the amazing detail captured in this huge image.

“Going by various names over the centuries, it became known by its present title towards the end of the 20th century after the large pearl earring worn by the girl portrayed there.[3] The work has been in the collection of the Mauritshuis in The Hague since 1902 and has been the subject of various literary treatments. In 2006, the Dutch public selected it as the most beautiful painting in the Netherlands”

“The painting is a tronie, the Dutch 17th-century description of a ‘head’ that was not meant to be a portrait. It depicts a European girl wearing an exotic dress, an oriental turban, and an improbably large pearl earring. In 2014, Dutch astrophysicist Vincent Icke [nl] raised doubts about the material of the earring and argued that it looks more like polished tin than pearl on the grounds of the specular reflection, the pear shape and the large size of the earring.”