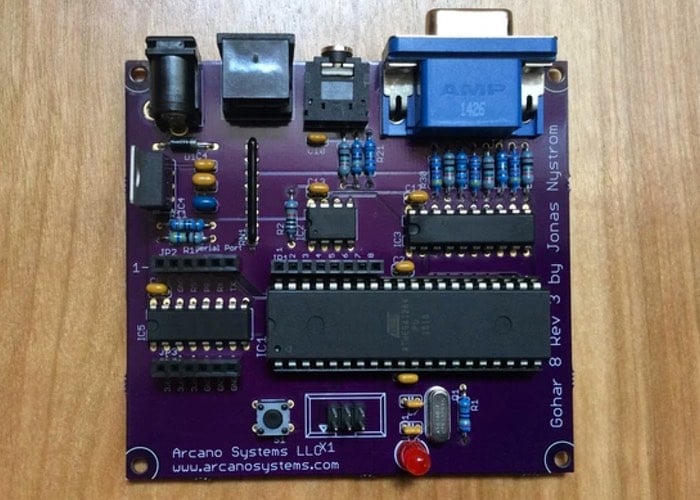 If you are in the market for a retro 8-bit chiptune synthesizer you may be interested in a new piece of hardware which is being created by Arcano Systems the form of the Gem-8.

The Gem-8 has been specifically designed to provide users with a retro 8-bit computer and chiptune synthesizer has taken to Kickstarter this week to raise the $4000 it requires to make the jump into a small production run.

Features of the Gem-8 include an Atmel Atmega1284 processor which is supported by 16 kB of RAM and includes 256-color VGA. Watch the video below to learn more about this small piece of hardware which is available to back by a Kickstarter with prices starting at just $100.

Other features of the board include PS/2 connection that is compatible with IBM PC AT scancode set 2, 8-bit-quantized line out (standard stereo connector with same signal in both channels) and a serial expansion port + 8-pin female GPIO pin header. Its creators explain more :

Two peripherals have already been created for Gem-8: a WiFi card and a MIDI interface. The WiFi card allows Gem-8 to connect to the internet using the preloaded serial terminal application. Gem-8 is particularly well suited to accessing online multi-user domains, text-based multiplayer online games, and bulletin board services that use the Telnet protocol.

Using additional applications included in Gem-8 OS, users can set the digital states of 8 output pins, which can interface with external components like LEDs and relay modules. Gem-8 users are also able to set the duty cycles of up to 8 pulse-width-modulation signals, which can be used to control servos or to vary the intensity of external LEDs.

For more information on the new Gem-8 jump over to the Kickstarter website for details via the link below.