If you have been enjoying the new Gear of War 3 game you might be pleased to know that its first DLC download called Horde Command Pack will be arriving on November 1 st.

The new Horde Command Pack includes three new maps, new weapons, skins and new characters : Onyx Guard, Big Rig Dizzy, Bernie. Together with new fortifications for Horde mode. The maps are Blood Drive, Azura and Rustlung, Blood Drive goes back to the classic maps style tradition of Gears which is sure to please long term fans of the series. 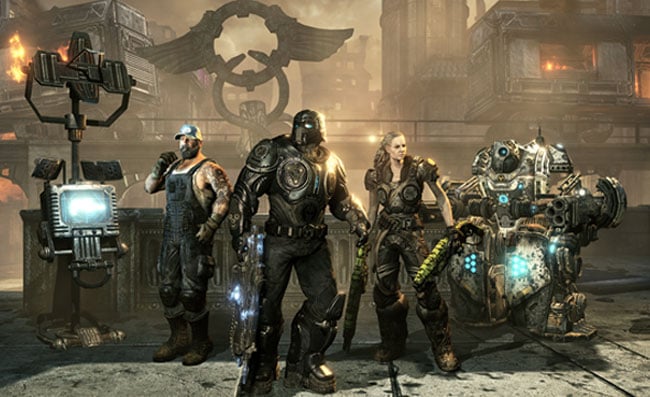 Official details of the new maps and fortifications

Blood Drive: The Jacinto Medical Plaza was overwhelmed by evacuated citizens after the government-sanctioned Hammer Strikes, and the ensuing riots quickly turned this safe haven into a dangerous inferno. An abundance of high ground and funneled choke points make this map a returning favorite to Horde.

Rustlung: Once the pride of the Royal Tyran Navy, the foredecks of this decommissioned battleship are now riddled with bullet holes. Any team with the fortitude to hold the exposed central torpedo bay will find that the ship’s Loader has been replaced with a battle-ready Silverback mech suit.

Azura: This island resort was once the exclusive domain of Sera’s educated elite, but the tranquil water gardens and lush foliage have become a hotly contested combat zone. Dual snipers overlook a powerful explosive weapon, while the defensive central platform may be your last resort of retreat.

Decoy Upgrade: This is an upgrade that turns your decoy into an Onyx Guard bot that will fight in your defense.

Sentry Upgrade: This upgrade adds a fire bolt sentry that deals more damage and is super effective against Berserkers. If only there was one to one-shot lambent zerkers.

Silverback Upgrade: This advancement allows you to upgrade your Silverback exo-suit with devastating rockets and extra levels of repair cost reduction.