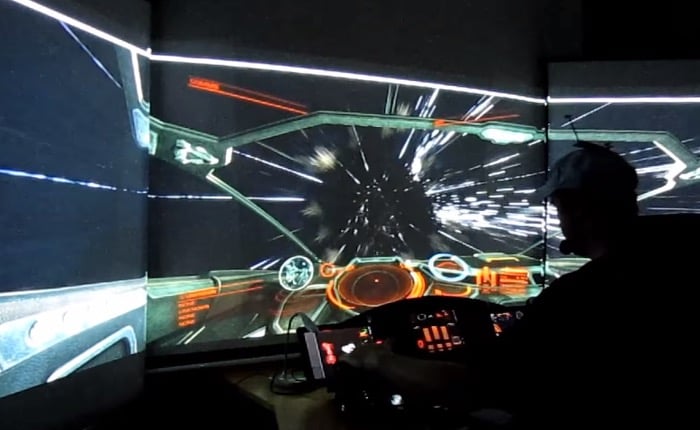 Together with a variety of other hardware components including voice recognition software, a Saitek X52 Pro joystick together with a Logitech G19 keyboard and a Logitech Z-5500 Digital surround sound system. Check out the system in action in the 10 minute video after the jump.

The hugely impressive gaming Elite Dangerous cockpit rig cost Markus Boesen just shy of £3,000, a price that does not even include the PC that is powering the setup.

“Elite: Dangerous is the spectacular new sequel in the Elite series of games. Head for the stars, take a ship and trade, bounty-hunt, pirate or assassinate your way across the galaxy in this massively multiplayer online space adventure.

It’s an awe inspiring, beautiful, vast place; with 400 billion star systems, planets, moons and asteroid fields just waiting to be explored and exploited. Why not join the thousands of people who are already playing Elite: Dangerous and dive into the greatest multiplayer space adventure game ever created.”