A few days back, a rumor suggested that a number of Samsung devices will skip the Android 4.2.2 Update and will be updated directly Android 4.3. It looks like the rumor turned out to be correct, at least for Galaxy Note II. Australian carrier Telstra has announced that the Galaxy Note II 4G will indeed skip Android 4.2.2 and will be updated to the “newer version” of Android, which is expected to be Android 4.3. Rumors have it that the search engine giant will unveil Android 4.3 very soon along with the second generation Nexus tablet. 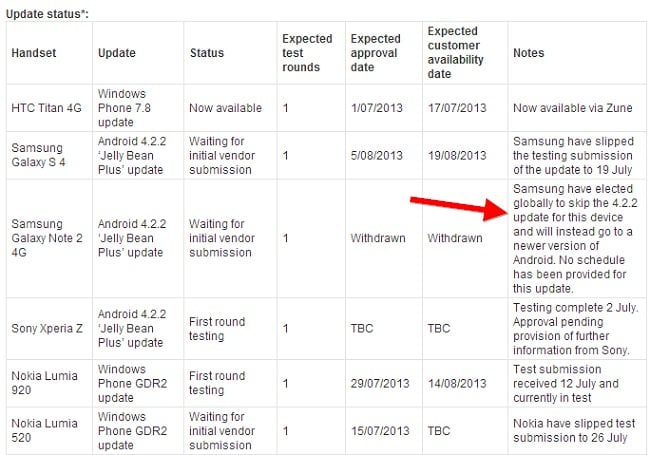 Samsung have elected globally to skip the 4.2.2 update for this device and will instead go to a newer version of Android. No schedule has been provided for this update.

Hopefully, the update will be released globally and all Note II users can rest assured that there device will receive the next big update. The time frame cannot be confirmed as it can take weeks or may be months for all Note II users to get their hands on the update.

Another interesting thing that can be seen from the schedule is the Windows Phone 8 GDR2 update for Lumia 920. It is expected that the Telstra powered Lumia 920 will get the update on 14 August if everything goes well with the testing. HTC 8X has been receiving the update already and we hope that other Windows Phone 8 devices will also get the taste of the GDR2 update.