Its literally raining rumors when it comes to the new  Nexus 7. We have seen the leaked photos, specifications and what not. A new rumor suggest that the much awaited second generation Nexus 7 tablet will hit the shelves on 31st July with the price tag of  $269, for the 32GB model. On the other hand, the 16GB model is expected to be priced at $229.

The folks at Engadget received a few images from an anonymous tipster that shows us the specification of the second generation Nexus 7. The device will feature a 7 inch display with 1080p resolution, powered by a 1.5GHz quad-core processor, 32GB storage, with Android 4.3 Jelly Bean on top of it. Interestingly, the tag mentions that the device will also feature wireless charging technology. The device also packs a 5MP back snapper with a 1.2MP front facing camera.

Interesting, it has also been revealed that the device will hit Staples on 31st July. However, this doesn’t mean that it will not be available for sale on the Google Play Store. Users who want to buy the tablet can still get their hands on the tablet online. 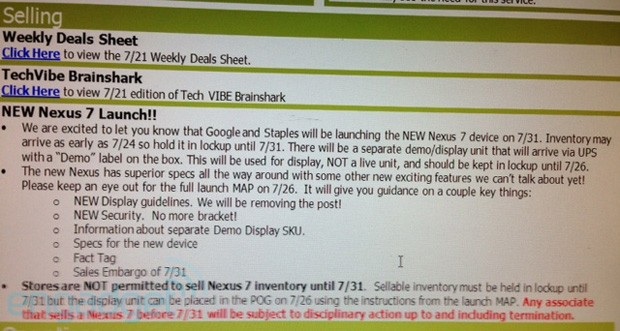 I guess it will all be unveiled at the Google press event that will be held next week. The search engine giant is expected to announce the much awaited second generation Nexus 7 tablet as well as Android 4.3 Jelly Bean update. Stay tuned and we will update you after the device launches.