Following on from their announcement last week that their K Computer has increased its speed to over 10 Petaflops. Fujitsu has now announced that their PRIMEHPC FX10 supercomputer is now theoretical computational performance tops out at 23.2 petaflops based on deploying 98,304 nodes across 1,024 racks. In comparison the K Computer can scale to 88,128 nodes across 864 racks. 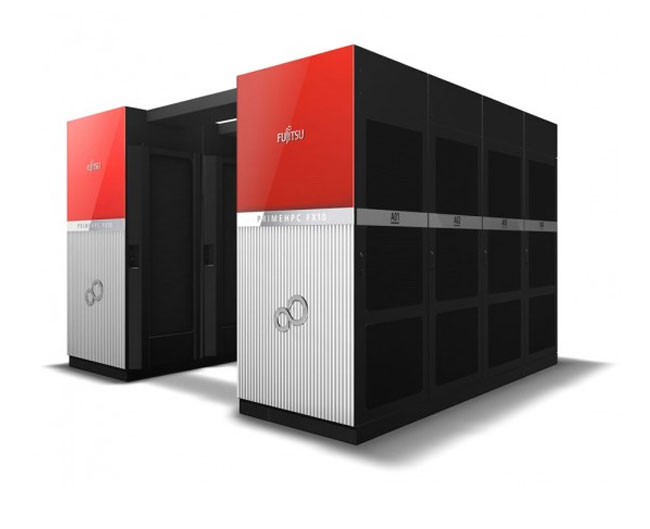 “Combining high performance, scalability, and reliability with superior energy efficiency, PRIMEHPC FX10 further improves on Fujitsu’s supercomputer technology employed in the “K computer,” which achieved the world’s top-ranked performance(2) in June 2011. All of the supercomputer’s components—from processors to middleware—have been developed by Fujitsu, thereby delivering high levels of reliability and operability. The system can be scaled to meet customer needs, up to a 1,024 rack configuration achieving a super-high speed of 23.2 PFLOPS.”

At its heart the FX10 uses a SPARC64 IXfx processor running 16 cores at 1.848GHz. Memory capacity tops out at 64GB with a bandwidth of 85GB/s or 5GB/s between nodes. In its highest configuration the FX10 can be running a total of 6,291TB of memory. As you’d expect, the operating system is Linux based.

Fujitsu hopes to deploy fifty FX10 configurations over the next three years with availability starting in January next year. For more information on this beast of a system jump over to the Fujitsu website.