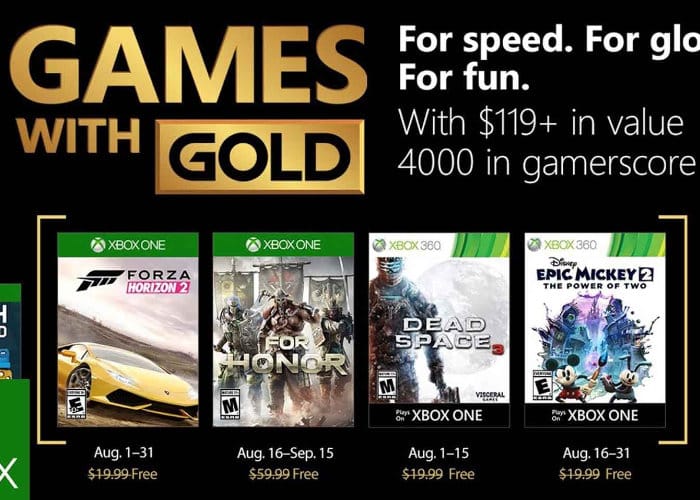 Xbox gamers will be pleased to know that Microsoft as made available the free Xbox Gold games for August 2018 making the titles available exclusively for Xbox Live Gold members for a limited time as part of Games with Gold. This month is offering include the 10th anniversary edition of Forza Horizon which will be available throughout the month of August.

– Forza Horizon 2 Standard – 10th Anniversary Edition – Drive over 200 exotic cars and explore the beautiful vistas of southern France and northern Italy like never before, in this 10th anniversary edition of Forza Horizon 2. Show off your driving skills with friends online in challenging races and events, day or night, in dynamic weather conditions. A world of beauty and freedom awaits in this ultimate celebration of speed and style.

– For Honor Standard Edition – Be prepared to enter the chaos of war in For Honor. Mix speed, strategy, and team-play across several multiplayer modes as you control your favorite warriors, be they bold Knights, brutal Vikings, or deadly Samurai. Master the innovative Art of Battle combat system and guide your armies to ultimate victory. Learn more about the upcoming For Honor – Season VII: Storm and Fury here on Xbox Wire.

– Dead Space 3 – Return as protagonist Isaac Clarke in the survival horror game Dead Space 3. Joined by Sgt. John Carver, travel to the ominous ice planet of Tau Volantis to uncover the secrets of the Necromorph plague. With online co-op mode, join a friend and use teamwork to end the deadly threat once and for all.