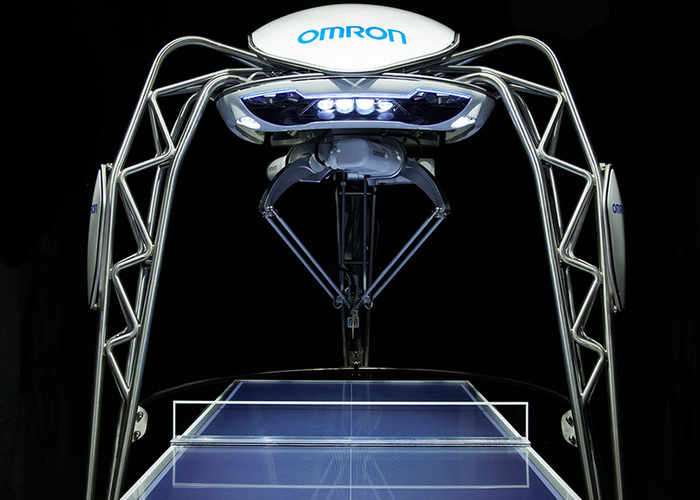 Hardware manufacturer OMRON has this week unveiled a new ping-pong robot which is being created to enable table tennis players to improve their gameplay without the need to play against the partner.

Equipped with two vision sensors combined with a motion sensor to measure the position of both its opponent and the movement of the ball up to 80 times per second, the artificial intelligence is capable of predicting the trajectory of the ball and hits it back to its human opponent with ease.

Watch the video below to learn more about the ping-pong robot and it skills.

OMRON explain more about its development :

FORPHEUS is State-of-the-art technology that embodies the world of “harmony” where machines can bring out human ability. You can experience the future of mankind and machines that OMRON aims through a rally.

The name FORPHEUS comes from “Future Omron Robotics technology for Exploring Possibility of Harmonized aUtomation with Sinic theoretics”. A coined term embodying OMRON’s robot technologies based on its unique future prediction theory “SINIC theoretics”. It is also a combination of “For” and “ORPHEUS (a bard in Greek mythology as a symbol of human creativity)”, representing OMRON’s attitude of bringing out human creativity and possibility.

OMRON assumes three stages, from the past to the future, in a relationship between humans and machines. The 1st stage is one of “replacement” by machines of tasks that need not be done by human. The Omron history mirrors this history, as we introduced factory automation, automated ticket gates, and other inventions.

The 2nd stage is “collaboration” between humans and machines, which is currently progressing in the world. An example of this is a production line where humans and robots work together, each performing the most suitable task to increase productivity. Another example is the Omron collision-prevention technology that supports our vision of a collision-free mobile society.

For more information on the new Forpheus Ping Pong Robot jump over to the OMRON website for details by following the link below.