If the past few years are anything to go by, real estate sucks. The idea that anyone can live bigger, larger, and more affluent even if they couldn’t afford it was an awful myth that duped a lot of people. The worst of it happened in the United States, of course, but the shockwaves reverberated around the world. A new standard for human habitation is badly needed. One that’s both aesthetically sensible and an inspiration for moderate lifestyles. 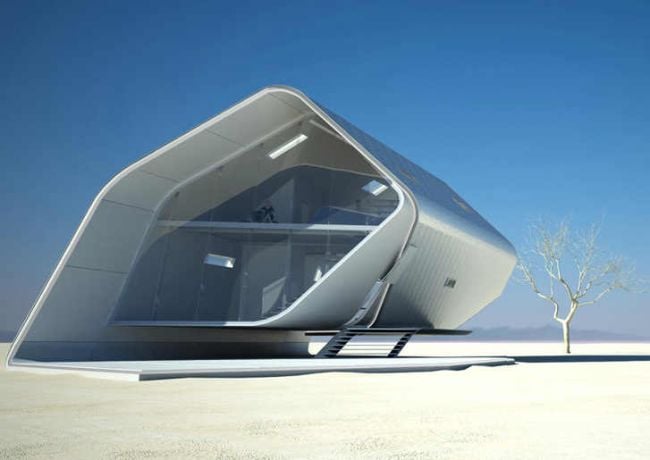 Now comes the Roll House from a futurist designer and it’s actually a refreshing take on the abode of tomorrow. Maybe this is the proper direction housing should take. Minimalist, modular, yet technologically viable. It’s called the roll house for good reason too; designer Christopher Daniel ‘built’ it out of a single metallic sheet.

Thus, where traditional homes are often the end result of a construction process, for Christopher Daniel a home in the desert is as easy as assembling IKEA furniture. Okay, maybe IKEA furniture isn’t as convenient for everyone, but the point is the Roll House enables its unknown owners to establish their own living space with ease.

Another important fact about the Roll House is it’s designed and engineered for an arid environment, which is why it’s pictured above in the middle of nowhere. Slightly better than a Bedouin tent, the Roll House comes with lots of bells and whistles, including remote-controlled interiors. As concepts go, however, it’s unknown if the Roll House is the answer to the world’s housing needs.