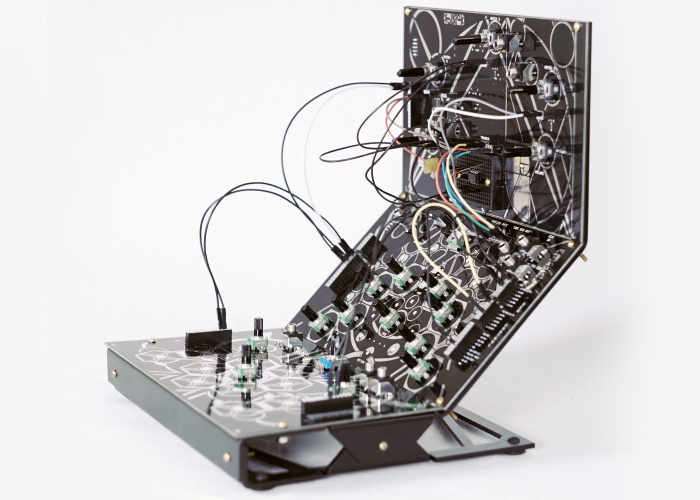 Folktek has created a very unique experimental modular eurorack-compatible 3 tier synthesis system, which is now coming to the end of its Indiegogo crowdfunding campaign and has raised nearly $200,000 thanks to nearly 400 backers.

Mescaline is a synth design by Folktek which merges art, design and synthesis into a tool which encourages exploration and experimentation in sound. A synthesizer system with a different approach which works standalone or within the eurorack modular system. This work is created by Arius Blaze and has been continuously developed and revised for two years.

Mescaline is a 3 part synthesis and sequencing system designed for experimentation. Our offer of this price is lower than the dealer price for the complete system or individual parts. By helping us to pay for the completion of this system, you’re becoming a part of the production. Composed of the individual boards: Channel, Motion and Mental which are all designed to work together by patching within the system.

Let’s start by saying that Mescaline is one of the finest times you’ll have. It might seem intimidating at first but ultimately once you dive in, you realize there was nothing to fear and it’s only here to help open you to extreme possibilities. It’s capable of creating entire compositions and the possibilities are vast.

• Each of these boards are eurorack compatible and can be installed in a eurorack system individually or all together. Each has its own eurorack power plug on the back. Each module is 44HP
• Each of these boards is capable of being powered on a standard 12v adapter. Each has a 2.1mm jack on the back.
• When used together, all power can be jumped to power all three boards off the same 12v power source or eurorack power source.