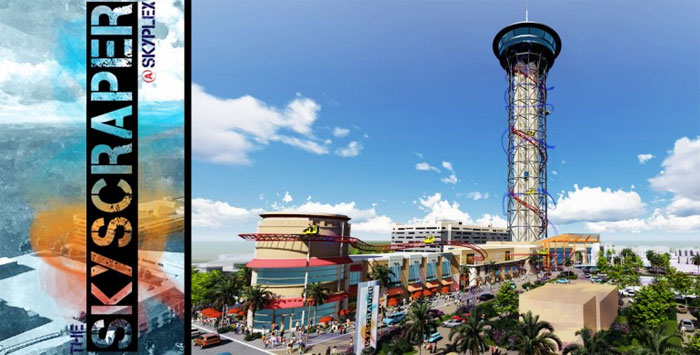 A massive rollercoaster will be coming to Orlando, Florida in 2016 with construction set to being in 2015. The gigantic rollercoaster is called the Skyscraper and will be part of a complex called Skyplex. Skyplex and the tall rollercoaster will sit on a 12-acre plot of land on International Drive in Orlando. Total floor space will be 495,000 square feet.

In addition to having, the rollercoaster attraction there will also be restaurants, retail spaces, and roller coasters inside the Skyplex building. The roller coaster will be situated on a 55-story tall tower and will wrap and loop around the building as well. Once complete it will be the tallest building in Florida. Atop that 55-story, 570-foot tall tower will be a restaurant and observation point.

To get to the top of the tower will require a glass elevator ride. The rollercoaster track will measure a total of 5,200-feet long. Riders will reach speeds of up to 65mph. the project will cost $200 million to compete with construction starting in 2015 and completion set for 2016. The rollercoaster is to be the first of the so-called “Polercoasters” to be built. I wonder how much a ride on the coaster will cost.