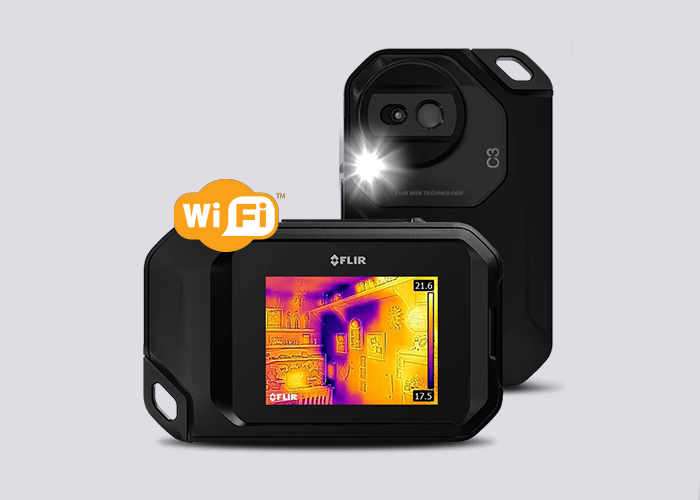 FLIR has launched a new pocket sized rugged thermal camera at CES 2017 this month which will be available to purchase during Q1 2017 priced at $699 and takes the form of the FLIR C3.

The FLIR C3 is an integrated thermal imaging scanner and has been created for the home inspection market, contractors and interested consumers.

The FLIR C3 can be used to detect moisture, electrical problems, heat leaks and includes a 3 inch touchscreen monitor as well as built-in wireless connectivity that allows you to transmit imagery directly to your smartphone and tablet devices for viewing. FLIR press release explains a little more :

Designed to be the go-to tool on the job, this dedicated, compact, rugged thermal camera fits perfectly in your pocket and is great for building inspection, facilities maintenance, HVAC, or electrical repair.

With a three-inch touchscreen and built-in Wi-Fi connectivity, the FLIR C3 allows you to quickly share captured images and video with employers, customers, and colleagues to save time and improve productivity. Connect the FLIR C3 to a smartphone or tablet with the FLIR Tools Mobile app, and instantly transfer images, build a report, and send them off without leaving your jobsite.

The FLIR C3 has professional level features like those found in higher-end FLIR thermal cameras, like on-screen measurement tools. Using the C3’s Hot Spot or Cold Spot feature, you can quickly measure within a defined area box. The camera will display a spot meter, as well as the maximum or minimum temperature, so you can instantly see where it’s the hottest or coldest.

The FLIR C3 includes both the FLIR Lepton thermal micro-camera and a visible camera. Through FLIR’s patented MSX® technology, we emboss the thermal image over the visible image to create a crisp, fully radiometric image.