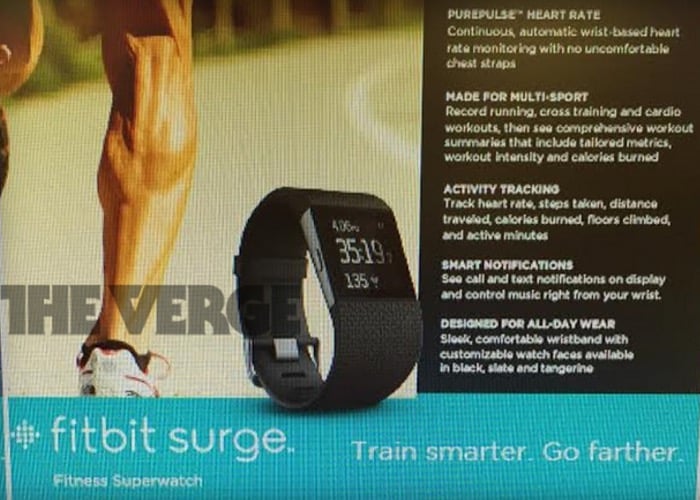 A new smartwatch and wearable fitness tracker has been leaked over the weekend in the form of the new Fitbit Surge which comes equipped with a built-in GPS and heart rate monitoring system.

A screenshot of the new Fitbit Surge smartwatch was leaked to the Verge website, revealing that it will be priced at around $250 when it launches and is being marketed by Fitbit as a “fitness superwatch”.

Features of the new Fitbit Surge fitness tracking smartwatch include the ability to use the GPS module to track distance, pace, and elevation climbed as well as review routes and split times.

The built-in heart rate monitor is also capable of monitoring your heart rate without the need to wear a chest strap and the device has been specifically designed for multisport enthusiasts whether they enjoy record running, cross training or cardio workouts.

The Fitbit Surge it also equipped with the ability to synchronise statistics wirelessly and automatically to either your Android or iOS smartphone or directly to your computer using the companion applications that will be made available at launch.

The leak of the new Fitbit Surge sheds some light on why Fitbit was reluctant to use Apple’s Health application to monitor the device, but as more information is made officially available or leaked we will keep you updated as always. Unfortunately at the current time no Fitbit Surge release date has been unveiled.