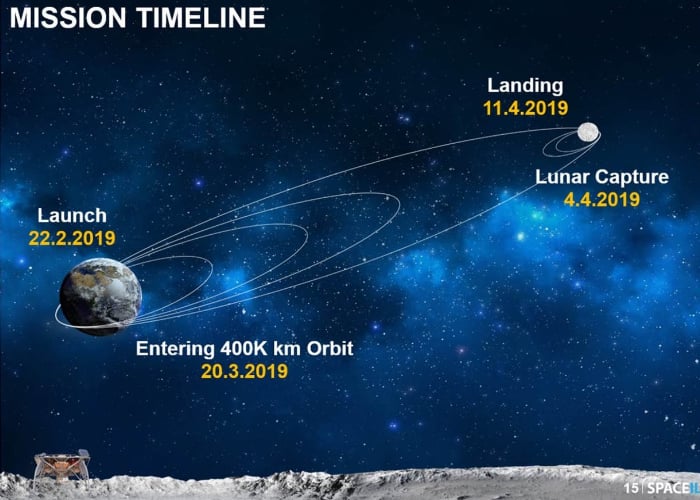 The SpaceX Falcon 9 rocket has taken the first private moon mission into space earlier today, taking the $95 million unmanned spacecraft in the first stage of its flight to the moon. Check out the full launch and first stage deployments in the video below and see the launch from Space Launch Complex 40 at Cape Canaveral Air Force Station, Florida. At 8:45 pm EST.  Israel Aerospace Industries (IAI) and the nonprofit SpaceIL have funded to project to make Israel the fourth nation to reach the moon.

Israel’s Beresheet lunar lander stands 4.9 ft (1.5 m) high and is 6.5 ft (2 m) in diameter. Instead of being inserted into translunar orbit by an upper stage rocket, the lander separated from the Falcon 9 second stage at an altitude of 37,282 mi (60,000 km) and will execute a series of orbital maneuvers to push it into increasingly eccentric orbital trajectories over the course of two months. It will then autonomously fire its engines for a soft touchdown on the Moon.

The New Altas website writes : “Surprisingly for a lunar mission, Beresheet (Hebrew for “Genesis”) was not the star of this show, but a ride-along payload for SpaceX’s Nusantara Satu mission to deliver a communication satellite for PT Pasifik Satelit Nusantara (PSN), a leading Asian provider of satellite-based telecommunication services, into Earth orbit along with the US Air Force Research Laboratory (AFRL) S5. The night launch took place under clear skies using a previously flown Falcon 9 first stage. No major malfunctions occurred and the payloads were deployed at approximately 33 and 44 min after lift off.”