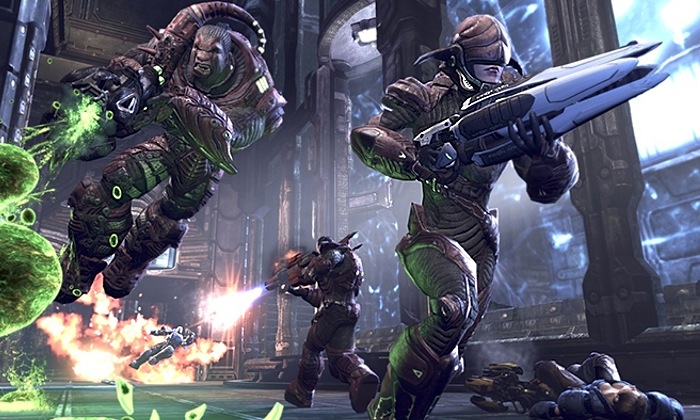 Last month Epic Games confirmed that their new Unreal Tournament game will be free to play and will be developed with the help of players and the Unreal Engine 4 Community.

The video below shows the Unreal Tournament development team playing Deathmatch for the very first time, in a skeleton frame for the game. Epic Games senior programmer and project lead Steve Polge explains :

”For years, we’ve wanted to reboot Unreal Tournament, but we knew we had to do it in concert with developers and the mod community, and in an environment that sets them up with the proper tools to make it happen,”-“Given the recent launch of UE4, we think this is the right time to move forward.”

“Our first development goal is to get a basic version of Unreal Tournament deathmatch up and running to provide a basis for iteration and further development,”-”If you’re a member of the UE4 community, you can participate or just follow our progress on the live GitHub fork. You can also get started extending or modding the code as it becomes functional.”

The new Unreal Tournament game is currently under development using the Unreal Engine 4 games engine and when it launches will be available to play on Linux, Mac and PC platforms.

If you would like to get involved with the development of the new Unreal Tournament game follow the Epic link below and join the Unreal Engine community who will be heavily involved in the design of the new multiplayer shooter.