Apple unveiled the highly rumored iPad Air and iPad Mini with Retina display earlier this week. Alongside the upgraded iPad lineup, Apple also announced the non-Retina display version in space gray color that was available at the online Apple Store. It seems that Apple started selling the space gray iPad Mini at its physical retail locations. The space gray model replaced the earlier black and slate version of the tablet. 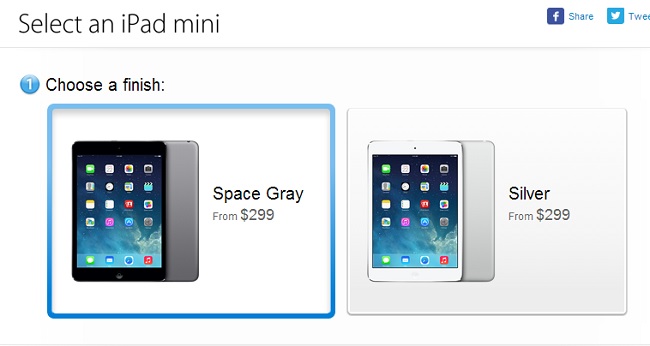 The tablet is not available at all retail locations so users are advised to call their nearest retail location to confirm availability. AppleInsider reports that several stores had the tablet available in stock earlier in the day, which was eventually sold out.

The non-Retina iPad Mini saw a price cut after the launch of the retina-powered iPad mini and costs $299  for the 16GB model, reduced from $329. The tablet is also available with cellular connectivity and comes with a price tag of $429.

If you are looking for more storage space, you don’t have any option other than the one with the Retina display which costs a  $399 for the 16GB model. The new retina-powered iPad Mini also comes with 128GB storage on board and costs $699 for the WiFi only model.

Are you going to get the new iPad Mini with Retina display or the first generation model?