No less than 10 NFL teams will be distributing a swanky new portable device among their fans this upcoming season to allow them never-before seen access to the game. 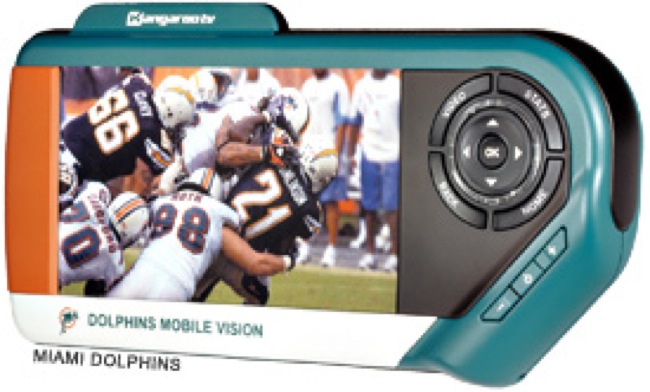 For just $200, Sprint’s FanVision allows football spectators to view 10 different channels, statistics and comely cheerleaders through its 4.5-inch LCD screen. To crown it all, they can revel in the ongoing carnage below them through different camera angles. There’s even replay and up-to-date score tracking.

The Fanvision is just the latest addition to the NFL’s ongoing campaign to let football devotees enjoy the spectacle with more relish. Together with supersized stadiums and titanic LCD screens hovering above the proceedings (really for the people seated farthest from the field), Fanvision creates a yet-unheard of connection between the football faithful: intimacy.

However, aside form its predictable specs, we’re quite underwhelmed by the look of the thing. Doesn’t it remind you of a certain game console? No surprise then that a few people have pointed out how an iPhone app would have been more sensible.

Already dubbed a niche product even if similar technology has been used in NASCAR for quite a while now, FanVision is expected to draw in the more dedicated set of football fans.

Despite its steep price however, people who shell out dough for seats in the luxury boxes will get one for free.