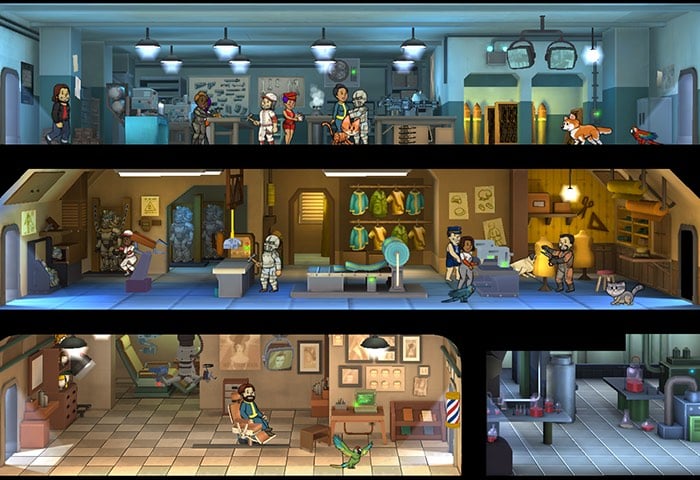 Fallout Shelter launched on June 14th 2015 ahead of the launch of the highly anticipated Fallout 4 game and is available to download for free from on both the iTunes App Store and Google Play.

Feature in the latest Fallout Shelter Update 1.4 include :

– New Rooms! Build the new Weapon and Armor crafting rooms and use them to create your own items in game!

– Take the Overseer role to the next level. Build the new Barbershop and customize the look of any Dweller.

– Keep up with the latest fashions! Find new Outfits and Weapons straight from Fallout 4 in lunchboxes, or craft them yourself!

– Time of day is now properly reflected. Because authentic Vault simulation is our #1 goal!

Fallout Shelter was an instant smash hit when it launched on iOS on June 14, 2015, climbing to the top of the charts and beating Candy Crush to become the third-highest-grossing game on the App Store in its first week. Since launching on iOS and Android devices, Fallout Shelter has received Best of 2015 awards from both Apple and Google and has won multiple mobile game of the year awards, including D.I.C.E. and Golden Joystick.

For more information on the new Fallout Shelter Update 1.4 jump over to the Bethesda official website for details via the link below.