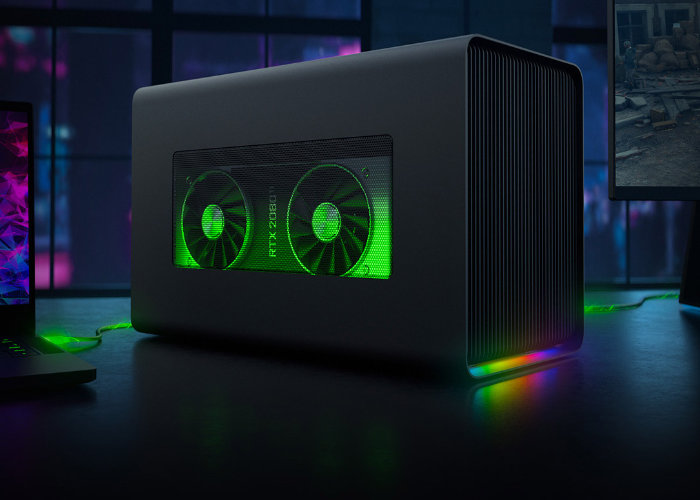 Razer has this week unveiled its new Razer Core X Chroma external graphics enclosure which now offers a 700w power supply together with the addition of 4 x USB Type-A ports and a Gigabit Ethernet port, when compared to the previously launched Razer Core X.

These extra upgrades to cost an additional $100 and the Razer Core X Chroma is priced at $399 compared to the Razer Core X price to $299 with a 650w power supply. Both external graphic enclosures feature space for a 3-slot card support Apple’s Mac OS operating system.

Also if you enjoy lighting in your gaming accessories you’ll be pleased to know that Razer as also added RGB lighting in the form of its in-house Razer Chroma system. The new Razer Core X Chroma external graphics enclosure is available from today throughout the United States and Canada will soon be available in the United Kingdom, France, Germany, Nordics, China, Australia, Hong Kong, Japan, Singapore, South Korea, and Taiwan.

“Give your thin and light laptop the power of a full gaming rig. Whether you’re hunting down enemies in an apocalypse or designing your own 3D world, the Razer Core X and Razer Core X Chroma deliver desktop-class graphics to your laptop instantly. Compatible with Thunderbolt 3 Windows 10 or Mac laptops. The Razer Core X series features support for the latest PCIe desktop graphics cards including NVIDIA GeForce and AMD XConnect enabled Radeon cards. Highly mobile developers can now harness the power of compatible NVIDIA Quadro cards and AMD Radeon Pro cards for professional graphics performance.”