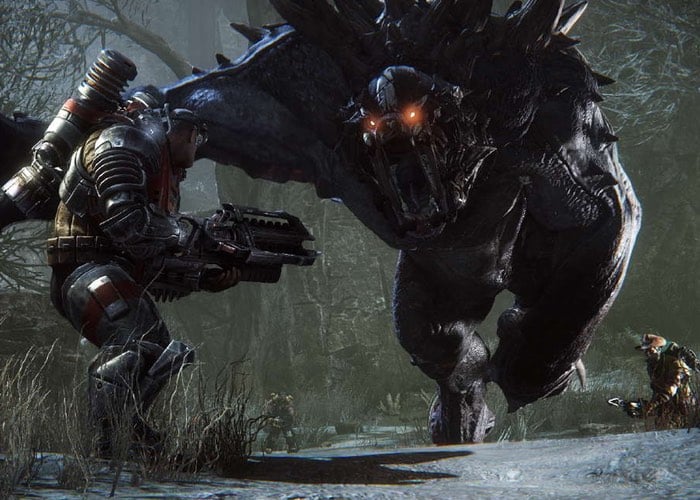 Turtle Rock Studios has today made their Evolve game free-to-play as a PC beta and have now removed the game from Steam. Although you can still read required specifications details and information about the game, but no longer purchase it directly from Steam any more.

Over on the official Turtle Rock community pages Chris Ashton and Phil Robb founders of Turtle Rock explain more about the company’s decision to change Evolve a free-to-play game model. As well as revealing some of the changes, tweaks and enhancements you can expect to see rolled out to Evolve in the near future.

Turtle Rock are also offering those that purchased Evolve originally a few gifts to keep them sweet, read on below to learn more.

When people first started playing Evolve at those and other conferences, it was magical. Sure, there was the AAA videogame hype surrounding our title. Yeah, we also had the flashy displays, the giant Goliath statue, and all the other things AAA games do to get people excited. And that stuff was cool. Really cool. But, what we lived for — what was cooler by far — was just seeing people play Evolve for the first time. We worked on it for years and then, suddenly, people got to experience our game, controller in-hand. There was genuine excitement — real joy — when people played. It was like nothing they’d ever played before and watching it happen was like no high we ever felt.

Then, when Evolve launched, the reception wasn’t what we expected. Sure, there were some good reviews. There were also bad reviews. Yes, there was excitement. There was also disappointment – for players and for us. The DLC shitstorm hit full force and washed away people’s enthusiasm, dragging us further and further from that first magical pick-up-and-play experience.

We want that magic back and we aim to make it happen. We’ve made a lot of changes, improvements and additions to Evolve over the past year and we’ve got a lot more coming. In short, we’re giving this game a vigorous overhaul!

Just to give you some examples:

We’re reworking the hunter classes to make the team less reliant on having experienced trappers and medics.
We’re making improvements to the maps and UI.
We’re improving load times, overall performance, and getting you into the game faster.
We’re focusing on improving stability and fixing bugs.
We’re completely reworking our progression system and tutorials.
We’re adding more customization options.
Most importantly, we just want to put the game in your hands. Try Evolve out. See what you think. We hope you like it and we’re not going to charge you to give it a try.

It means we’ve been listening and now we’re taking Evolve in the direction that a lot of you have suggested since the beginning. We’re making Evolve free on PC. No buy-in or box required.

Making Evolve free on PC is going to be a process that takes time and a lot of hard work, but we believe in Evolve and we believe in you, our players and want to do what’s best for both!

Here’s how it’s going to work: We’re going to make Evolve free on PC as a Beta starting on July 7. This is going to allow us to hit our new server infrastructure really hard and we need your help testing. Stuff could break, and that’s our hope, because that will give us time to improve things as we go. We’ll parse out major Beta revisions, updates and features over a period of weeks and months — a plan we’re going to continually communicate here. This allows us to test new features and major changes to make our game more accessible and ever closer to the joy we saw when we first showed our baby to the world. Just as importantly, this Beta plan gives us the flexibility and time we need to keep fixing bugs and making Evolve more stable.

“What about those who paid for Evolve? What about Season Passers?”

Anyone who owns classic Evolve will be given “Founder” status in the new free version, and all the content you already own comes with you to the new version. As long as we work on Evolve, we will show our appreciation for our committed fans and early adopters with gifts, rewards, and special access. Why? Because you believed like we did, and we will never forget that.

As part of our promise to recapture the magic and improve the Evolve experience across-the-board, we’re going to ratchet up our communication with the community. We will be continually updating our social channels, our forums and our website to let you know how it’s going.

We have lived and breathed Evolve for over four years and we feel like we are just getting started. Since launch we realized Evolve has provided people some of their most exciting gaming moments and we want to make more of those for everyone… well, everyone who is OK with being periodically murdered (brutally) by terrifying alien monsters.

See you on Shear.