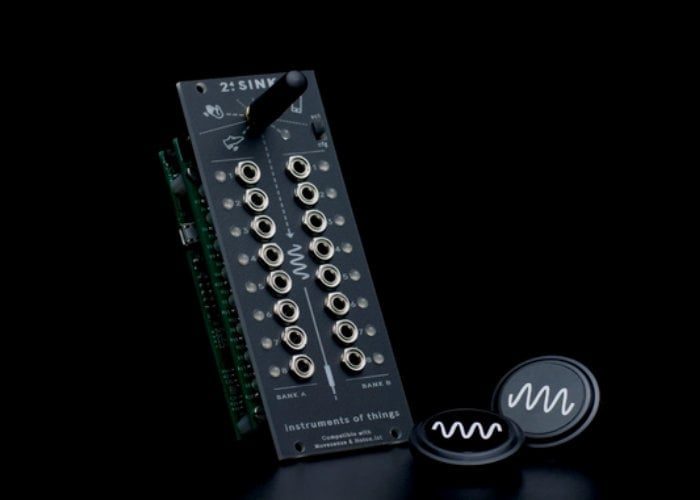 Music makers and musicians may be interested in a new Eurorack module created by the team at Instruments of Things in the form of the 2.4SINK, which has this week launched via Kickstarter to raise the required €20,000 needed to make the jump into production. Watch the demonstration video below to learn more about the sense interface specifically designed for Eurorack modular synthesisers.

“2.4SINK by Instruments of Things is a generic interface for Eurorack systems that is designed to allow novel, meaningful and experimental interactions with existing modular synthesizers. 2.4SINK allows wireless connections via Bluetooth® LE with our branded Movesense motion sensors to create highly expressive and unique stage performances, or connected via Wi-Fi (OSC) to the Holon.ist iOS app by Holonic.Systems to use environmental information like weather or heart beat as input sources for controlling arbitrary sound parameters. In addition, the 2.4SINK Eurorack module offers easy connection to wireless MIDI controllers via Bluetooth® LE MIDI, reducing cable confusion.”

“2.4SINK offers fixed OSC address paths to control the outputs via any OSC client (e.g. Max, Pure Data, SuperCollider). The output function can be changed during runtime. The incoming values must be normalized between [0, 1] in unipolar mode and [-1, 1] in bipolar mode. To ease the usage of OSC via Wi-Fi, zeroconf network discovery (e.g. Bonjour) can be used to find the OSC server IP and port. The OSC address scheme is as follows: <Bank>/<Output>/<Function> <Value>.”

Early bird pledges are available from €259 or roughly £223, with worldwide shipping expected to take place during December 2019. For more information the complete list of all available pledge options jump over to the official crowdfunding campaign page on Kickstarter.