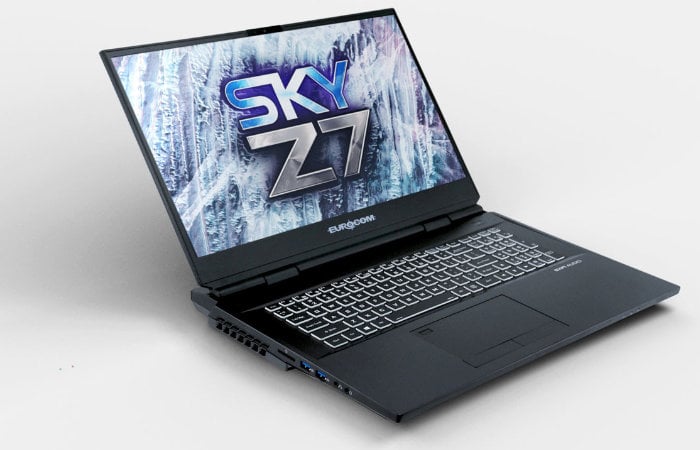 Unlike most laptops created by the likes of Dell, Apple and others Eurocom has created a laptop with fully upgradable components. The EUROCOM Sky Z7 R2 offers native support for PCIe 4.0 when using 11th Generation Intel (Rocket Lake) CPUs via one of its M.2 2280 SSD slots and is one of the few laptops built to utilise the modular GPU technology based on the MXM 3.1 version 2.0 socket technology. The laptops modular design allow for safe removal and replacement of the computers CPU, GPU, Memory, Storage, LCD, and more. Specifications for the laptop include :

Having slots or sockets allows the Sky Z7 R2 to customized, upgraded and modified with compatible parts- giving this Eurocom Mobile Supercomputer the ability to run the most demanding applications and perform high level tasks for a very long time. As newer and improved technologies emerge within the same chipset, the EUROCOM Sky Z7 R2’s hardware components such as the CPU, GPU, RAM, storage, LCD, to name a few, can all be upgraded and replaced relatively easy in order to acquire more power as desired. Having modular components greatly increases the laptop’s lifespan for many years and prevents the cycle of having to buy new laptops every few years, which can be the case with most laptops that have non-upgradeable components.”