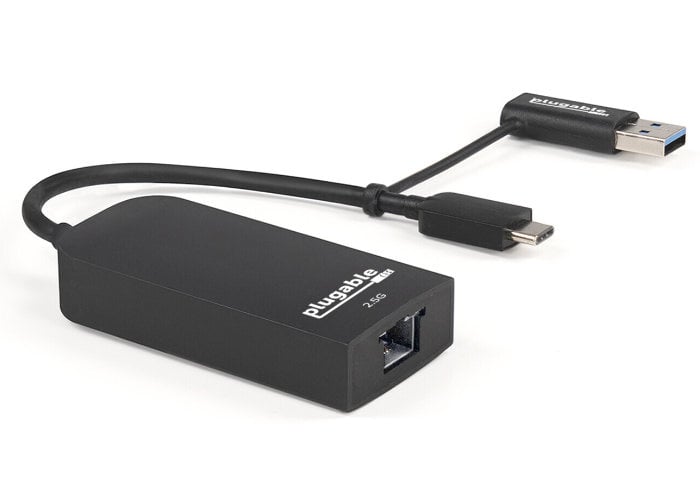 Plugable as announced the launch of a new 2.5 Gigabit Ethernet adapter complete with USB-C and USB 3.0 (USB-A) connectivity. Enabling those wishing to upgrade adesktop computer or laptop with extra networking performance. You’re likely to see much wider adoption of 2.5 Gbps network equipment supporting the 2.5GBASE-T / 802.3bz standard in the year ahead. The
USBC-E2500 2.5 Gbps USB network adapter can connect to a system with USB-C ports, and also includes a handy permanently attached USB-C to USB 3.0 (USB-A) adapter.

“While most Ethernet adapters only support 1 Gigabit link rates, this USB adapter supports wired speeds up to 2.5 times faster than the 1 Gbps standard when used with Cat 5e cabling (commonly found in existing network environments), and a 2.5 Gbps-capable router or switch. With 2.5 Gbps routers still somewhat rare in home environments, users who would benefit from the increased network throughput—but don’t wish to yet invest in a 2.5 Gbps router or switch—can use 2 of these adapters to create a direct peer-to-peer network between 2 systems. With this increased performance, users can take advantage of advances in high-speed networking and storage technologies, without requiring a difficult or expensive setup.

The adapter is backwards compatible with earlier networking standards such as Gigabit (10/100/1000) networks, and supports key features such as jumbo frames, auto-negotiation, and is compatible with both full-duplex and half-duplex networks, making it an ideal choice for current and future network connectivity.”