It works real simple. Once you’ve got it lying somewhere just give the smiley face a pop and it goes “You’re Awesome!” Really? Well, the machine says so. As for whether you are an awesome person, uh, that’s subjective. It’s like a Transformers movie, liking it or not liking it is subjective. Right. 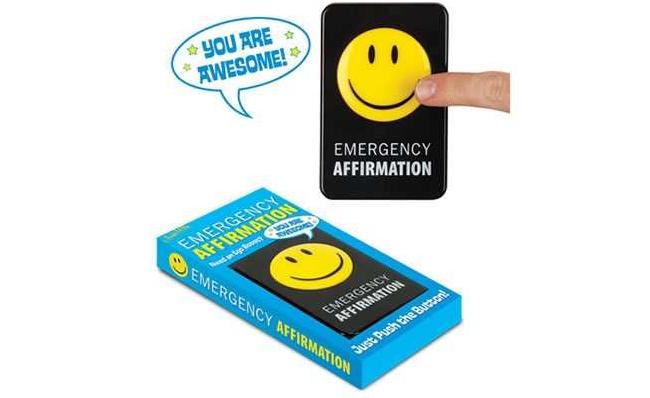 This cheery awesome button is now available at Amazon for an affordable price. The accompanying product hype claims it an uplift even the downest of spirits. It’s like a drug you don’t have to ingest. By the way, see the pic above? We have no idea where that creepy finger came from. No idea.

Since this is some type of gadget, there must be specs. Too bad we have no idea what kind of batteries this button runs on. Oh well, at least it’s sort of useful—as a paperweight. Oh yeah, it also says ‘awesome.’

The button is selling for $12 and if you’re the type who needs to be told you’re awesome maybe this is a good investment. Positive affirmation is what we need now in our troubled times.

Since much awesome is mentioned in this post, we can’t help but we reminded about the song “I’m Awesome” by S’pose. It resonates with us. Nothing beats self-affirming delusions of grandeur.