While it may have recently laid claim to one of the industry’s most storied studios and revived one of the most cherished RPG series in existence, Bethesda will always be the house that Elder Scrolls built. As well as the house that built Elder Scrolls. And seeing how very few studios can manage a proper single-player RPG these days, much less a sweeping epic with fully explorable vistas that make your knees wobbly, there was no way we were going to miss a chance for some quality time with Elder Scrolls V: Skyrim at Eurogamer Expo. 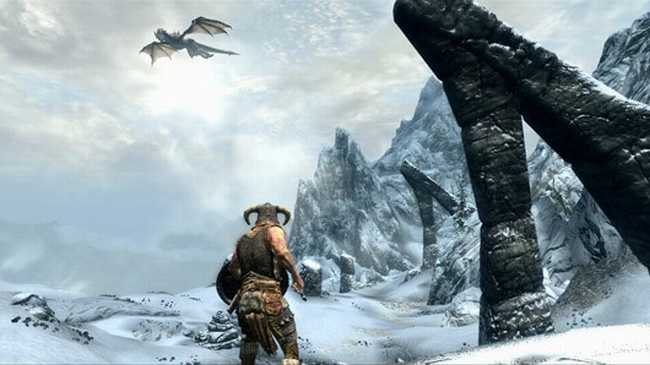 Visually, it’s not the dramatic step up Oblivion was over Morrowind, but your breath will still catch when looking at that first horizon line. Even disregarding the occasional placeholder textures and errant animation, you can almost feel the crispness of the unfolding titular patch of Tamriel rub against your eyeballs. But skin-deep isn’t where Skyrim’s appeal stops, it’s where it begins. Playing through the first village and immediately being sent after some bandits will quickly lull you into a sense of business as usual. So much so that you might not even notice the extra button the first time you futz through the redesigned inventory to gear up.

That extra button that lets you equip two weapons. That are independently controlled. And can be used in devastating finishing moves. If you don’t feel like casting two spells at once instead, that is. If there’s been an RPG in recent memory that can instill a player with a more personal and visceral sense of overwhelming power, we haven’t played it. And we’re not counting on playing one where a huge and meticulously detailed world is just a distraction from frying and freezing wolves at the same time anytime soon.