New statistics released by Asymco indicate that the current trend for downloading apps from the iTunes App Store will overtake the downloading of songs on iOS devices very shortly. Taking just half the time for apps to reach the 10 billion download mark when compared to songs.

When the 10 billion download statistic released by Apple last week, is split between sold iOS devices the figure works our to around 60+ applications have been downloaded by each iOS device. A staggering performance when you consider many short sighted companies thought that the app market was just a fad a few years ago. 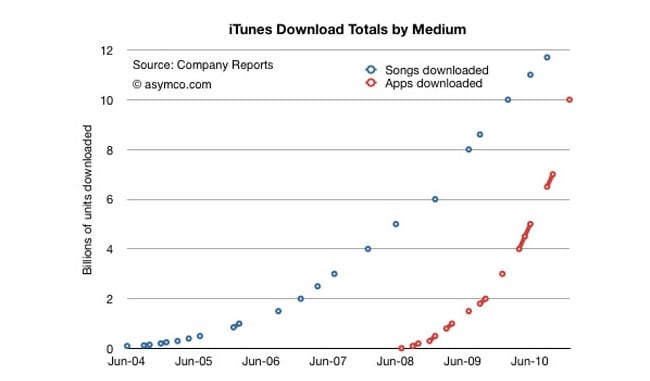 Over 30 million applications are now being downloaded every day from the iTunes App store and the figure is still growing and back in 2008 the average number of apps download per device was just 10.

If the growth continues at this current rate which it is expected to do so it will not be long before Apple app sales passes PC software sales. Also due to the number of apps now associated to a single device the higher switching costs for users pay prove to become a problems for competitors to Apple, when trying to attract customers to their offerings.