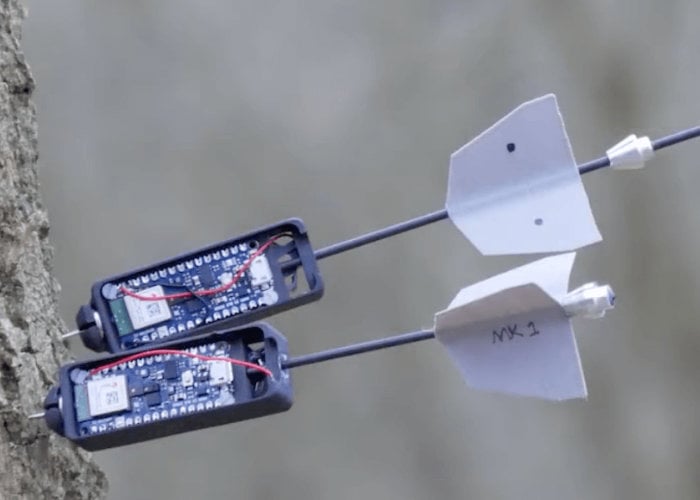 A research team at Imperial College London have created a new aerial sensor deployment system which uses a drone capable of firing Sense darts into tree trunks for data collection from hard to reach locations. The drone firing mechanism uses a compressed spring together with a shape-memory alloy (SMA) trigger to fire the sensor pods at a nearby surface up to a range of 4 m. Check out the quick demonstration video below to see the drone firing sensor darts. From between 1 and 4 meters away, the darts stuck between 90 and 100 percent of the time say researchers.

“When it comes to using drones to set up sensor networks, you’ve generally got two options: A drone that just drops sensors on the ground (easy but inaccurate and limited locations), or using a drone with some sort of manipulator on it to stick sensors in specific places (complicated and risky). A third option, under development by researchers at Imperial College London’s Aerial Robotics Lab, provides the accuracy of direct contact with the safety and ease of use of passive dropping by instead using the drone as a launching platform for laser-aimed, sensor-equipped darts. “

The sensor has been created from an Arduino Nano 33 BLE Sense development Board enabling researchers to gather a variety of different measurements and data points without the need for extra hardware. For more information on the project jump over to the Imperial College London papers on the IEEE Spectrum website by following the link below.