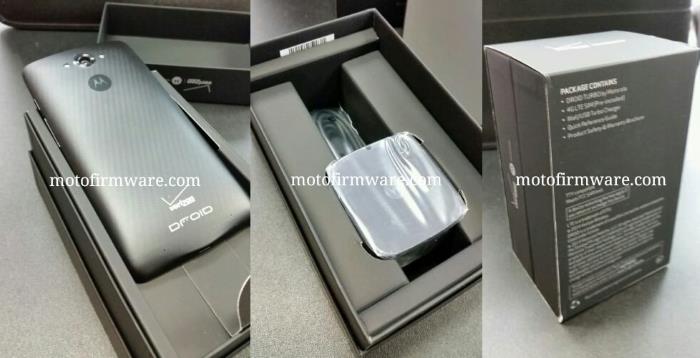 In the past few weeks, we’ve seen a handful of information about the upcoming Droid Turbo. Not too long ago, the alleged device posed for the camera in all its glory.

Recently, some more images of the retail packing of the Verizon Droid Turbo made its way on the internet. The handset looks exact the same as the one we’ve seen in leaked images before, and it also includes Motorola’s turbo charger.

The handset is said to launch on Verizon on October 29th, and comes with a kevlar back which isn’t too pretty when compared to the current flagship devices. However, it brings to of the line specifications on board. There’s a 5.2-inch display sporting a resolution of 2560 by 1440 pixels, and is expected to ship with Android 4.4.4 KitKat as its operating system out of the box.

The alleged device will also features a quad-core Snapdragon 805 processor, 3GB of RAM, and 32GB of internal storage on board. It also features a 21MP primary camera with 4K video recording capabilities, and a massive 3,900 mAh battery to make sure there’s enough juice for the handset.

As per rumors, the handset is going to hit retail carrying a $199 price tag tied to a two-year contract with Verizon, or customers interested to pay in full can get it for $599.