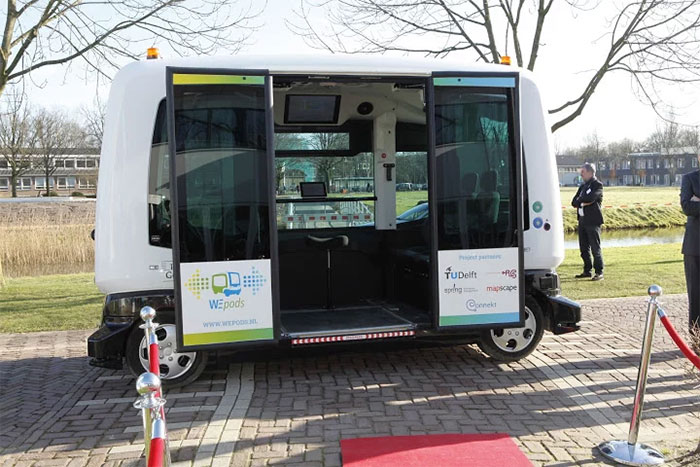 A new test of driverless cars on public roads has kicked off in the Netherlands. The testing is using a Wepod shuttle bus to carry passengers along a short route. The Wepod is 100% an autonomous car with no provisions for a human driver to control the vehicle. There is a controller that sits in a distant remote room that the passengers can speak to if needed.

The remote operator can also send commands to the Wepod if needed. Wepod testing is under way at the campus of Wageningen University in the Province of Gelderland. If testing goes well the province could expand the route for the bus to more stops including a stop at the intercity railway station. The Wepod can carry six passengers and has an automatic door.

A wheelchair lift is integrated to help the handicapped use the bus. Maximum speed for the Wepod is 25mph, but in testing it will be limited to 16mph. Wepods are electric vehicles and they can drive 62 miles per charge. The vehicle uses detailed route maps, radar, cameras, and laser sensors to navigate its route. The initial testing and decision to expand the routes is expected by summer 2016.