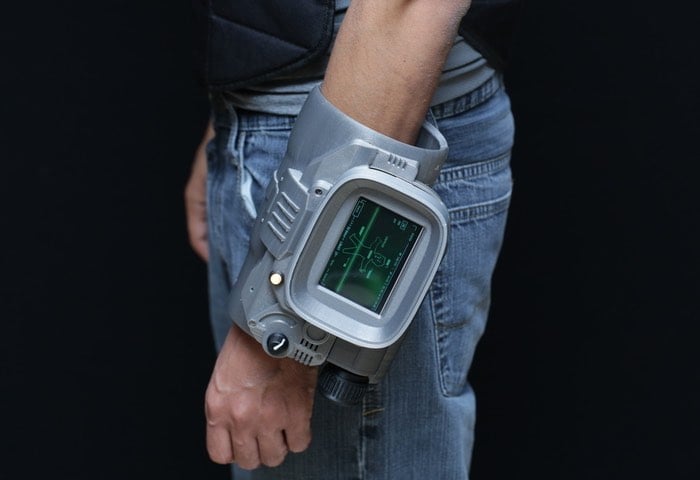 Fallout fans that were unfortunate not to be able to get their hands on the limited edition Pipboy version of the game, but would still like to be able to wear one. Maybe interested in a new tutorial that explains how to make your very own DIY Pipboy 3000 Mark IV using a Raspberry Pi and 3.5 inch PiTFT screen.

The DIY Pip Boy 3000 Mark IV is powered by the awesome Raspberry Pi mini PC and runs the ‘pypboy’ python program which has been specifically created for the Pi mini PC and features OSM for map data.

Check out the video below to learn more about its construction and the 3D printed Pi Pip Boy case which encloses the 2200mAh Lithium Battery, 2.5W Mono Audio Amplifier, raspberry Pi, PiTFT screen and wireless module.

In this guide you’ll learn how to 3D print and build your own functional Pipboy 3000 using a Raspberry Pi and Adafruit 3.5″ PiTFT. The pypboy python program for the Raspberry Pi features OSM for map data which allows you to browse your terrain rendered in glorious retro green graphics. It features an audio amp + speaker with the actual score and background music from Fallout 4. An analog rotary switch lets you switch between different modes in the pypboy python program.

The 3D printed enclosure has cutouts for most of the IO ports for the Raspberry Pi, so you add your favorite peripheral like a WiFi dongle, keyboard and mouse. The 2200mAh battery can be recharged over USB and fits inside an aesthetically looking cylindrical case. Details like the super bright yellow LED, rotary encoder, speaker grill and faux gauges really make this look like a Pipboy 3000 Mark IV.

For full instructions and component list of everything you will require to make your own DIY Raspberry Pi Pip Boy jump over to the Adafruit website via the link below.