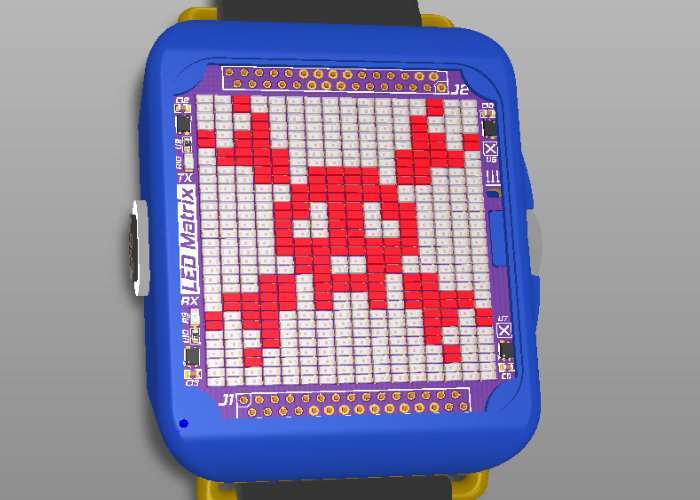 Anyone who is wanted to create their very own LED matrix watch may be interested in a new project which is being entered into the The 2017 Hackaday Prize competition and has been created by user Mile.

Check out the video below to learn more about the 16X16 LED Matrix wristwatch which has been inspired by retro LED watches from the 1970s and 1980s. Mile explains more about the project :

Goal of this project is to make unique and artistic wearable device for every day carry. Information is dispalyed on custom 16x16 monochromatic led matrix made out of 0603 leds. Device can be programmed form Arduino IDE through built in micro USB. Micro USB is also used to charge lithium-polymer battery of 300mAh.

With 300mAh battery and daily active time of 30min autonomy of 10 days should be possible. There are also RTC chip with alarm function, accelerometer, ambient light sensor, piezo transducer and hall effect switches to replace mechanical switches. Small neodymium magnet on the side of the watch is used to activate hall switches and emulates the look of “Crown” of mechanical watches.

Watch is made of two PCBs arranged in “sandwich” structure. Top board holds 16x16 LED matrix while bottom board holds electronics for driving the matrix. Boards are connected with pin headers and spaced 0.8mm(thickness of spacer PCB). LED Matrix is made up of tightly spaced 0603 Vishay TLMS1000 Low Current LEDs. This is possible due to shape of the lens which covers entire LED body and pads that are located beneath the LED. Each matrix segment is actually two LEDs so that it looks like a single 1.6x1.6mm square.

For more information jump over to the Hackaday website by following the link below.