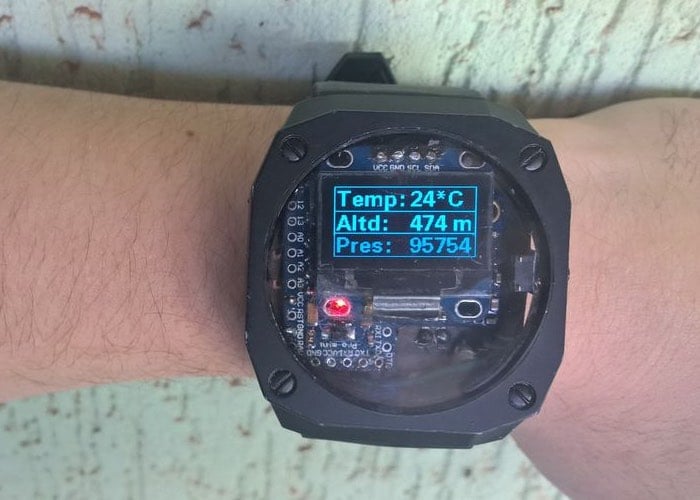 Instructables user benhur.goncalves has published a new project that provides details on how to create your very own DIY Arduino watch that is equipped with a number of useful features that include Altitude, Temperature, Compass and Pedometer to name a few.

Watch the video below to learn more about this awesome DIY Arduino watch that uses a GY-87 sensor board, that offers three sensors in the form of HMC5883L for the compass, BMP085 for the pressure, altitude, temperature and MPU6050 for the accelerometer and gyroscope.

Last few days I’ve been obsessed with the idea to make my own watch from arduino parts, but something cool I could use and say I did it myself. So I found out there was a sensor board (commonly named GY-87) which had three sensors on it: HMC5883L (compass), BMP085 (pressure, altitude, temperature) and MPU6050 (accelerometer and gyroscope).

With it, via I2C, I could add an Arduino Pro Mini, and an I2C Oled Display and make a watch capable of having all this information, plus a pedometer (by analysing accelerometer data).

Cool enough, it was incredibly easy to make, and you will just need some cheap parts, a small amount of Eagle PCB knowledge, some skill on making your own PCB board, and preferably a cheap watch to unmount and get the bracelet / carcass.