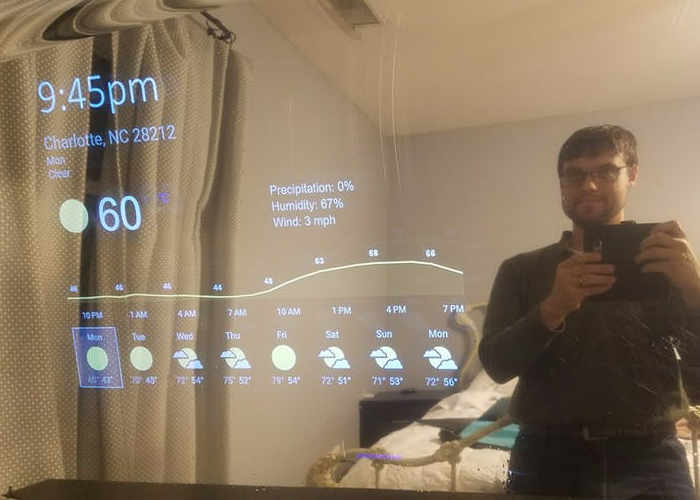 A fantastic project has been published to the Hackster.io website this week created by Patrick Graham which uses Android Things to create a magical smart mirror that displays the time, weather and other important information about the day. Powered by a Raspberry Pi 3 model B the smart mirror uses the Google created Android Things software to power components.

Google has designed Android Things to enable developers, makers and hobbyists to reduce the large upfront development costs and risks sometimes inherent in creating a project and getting the idea to market. Google has a pricing structure that scales linearly and your ongoing engineering and testing costs are reduced by Google-providing ongoing updates to the platform. To learn more about the Android Things development platform jump over to the official Google Android Developer website by following the link below.

I’ve wanted to make my own magic mirror for a while now and have been following different ways of doing it. I’ve seen magic mirrors that ran on Raspberry Pi running the Raspbian operating system before, and I’ve seen magic mirror applications for Android that ran on tablets, but I’ve never seen one using Android Things. This project demonstrates how easy it is to take any existing Android application with open source code and use it in an Android Things device.

Learn more about the project over on the Hackster.io website by following the link below. If you are interested in creating your own DIY smart mirror you can use a Raspberry Pi mini PC with components for less than $80.