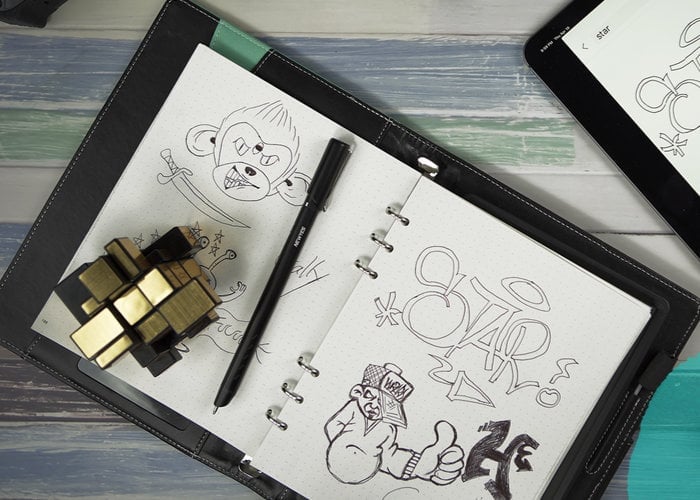 Newyes a paperless digital notebook system that can be used on traditional paper all on the LCD e-tablet writing screen. Supporting 71 languages the paperless notebook captures your sketches and writing simultaneously displaying them on the display. Watch the demonstration video below to learn more.

Users can easily switch between two writing modes and the Newyes Syncpen stylus supports 1024 pressure levels and is capable of capturing more than 200 frames per second thanks to a built-in camera with the lens recognition. connectivity is provided by support for Bluetooth 4.2 offering wireless transmission of your notes, sketches and documents. Available via Kickstarter early bird pledges are now available from $109 or roughly £83 and worldwide shipping is expected to commence during July 2019.

“Newyes is pretty much the world’s coolest Syncpen, E-tablet and notebook set that can be seamlessly switch between paper and paperless writing. How cool is that! Whether you’re taking notes in a journal or doodling on an electronic tablet, Newyes Instantly mirrors your content on your phone or pad and store them on the cloud ! ! ! With both the paper and paperless mode you can switch back and forth easily! If you need a pen, tablet and notebook that can record your notes, thoughts and inspiration anytime, anywhere. The Newyes is exactly what you’ve been looking for!”

“The Newyes isn’t just a smart pen. It’s an unprecedented intelligent handwriting system. It works with paper or your electronic tablet and has a specially designed algorithm with a unique micro dot pattern and build in camera that captures the exact location of everything you write and draw! Newyes is revolutionizing everything we know. Now you can sketch, write or draw on the same tablet again and again without wasting paper. Capture every version or iteration in the digital cloud!”