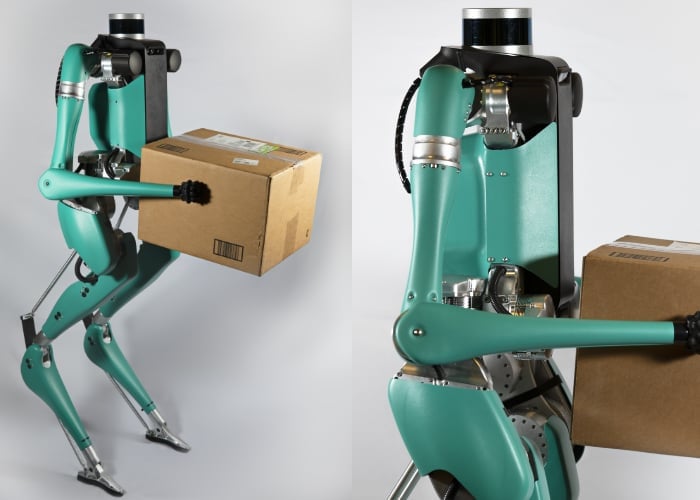 Agility Robotics has this week unveiled its new Digit bipedal robot which adds an upper torso, arms, sensors, and additional computing power to the successful Cassie robot design. Check out the video below to learn more about the lower body bipedal robot section called Cassie. Digit’s four degree-of-freedom (4-DOF) arms greatly extend both the mobility and applications available to Digit as you would expect.

Dr. Jonathan Hurst, CTO and co-founder of Agility, “arms are simultaneously a tool for moving through the world – think getting up after a fall, waving your arms for balance, or pushing open a door – while also being useful for manipulating or carrying objects.”

At the current time the Digit robot this still under development but is already strong enough to pick up and stack boxes weighing up to 18 kg, as well as use its new arms to help the accelerate it’s torso and body during a fall.

“In addition to the physical changes, the control system for Digit has been overhauled to enable advanced behaviors such as stair climbing and footstep planning, all controlled through a robust API that can be accessed both onboard the robot and via a wireless link. Further, Digit’s torso houses two multi-core CPUs, and a modular payload bay allows a third computer – in a variety of possible form factors – to support additional perception and reinforcement learning capabilities.”

Agility is expected to unveil pricing for the new Digit robot sometime during the middle of 2019 with deliveries expected to commence during Q1 2020. As soon as more information is made available by Agility Robotics we will keep you up to speed as always.