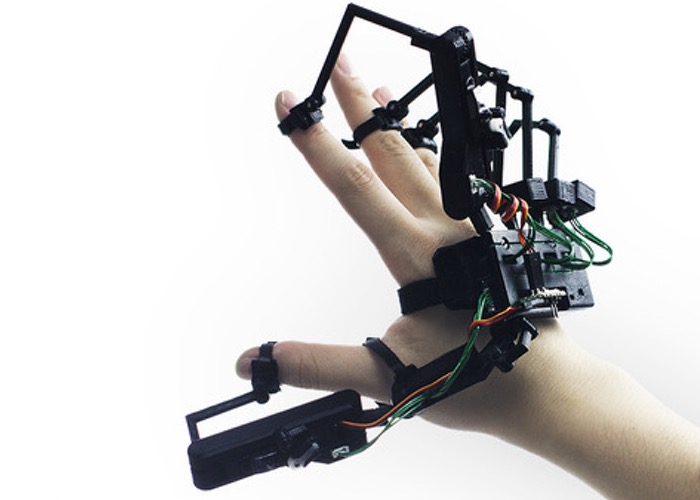 If you are interested in the Dexmo Exoskeleton virtual reality glove which has been designed by Dextra Robotics to provide the ability to receive touch force feedback from within virtual reality world’s.

You might be interested to know that it is launched this week over on the Kickstarter crowdfunding website and is now available to pledge for starting at $65 for the Dexmo Exoskeleton glove and a developer kit. Watch the video after the jump to see it in action and learn more about this innovative new technology.

The Dexmo project is currently over on the Kickstarter crowd funding website looking to raise $200,000 in pledges to make the jump from concept to production. Dextra Robotics explain a little more :

“It senses three degrees of freedom of motion for the thumb, and both the split and bending of the other four fingers. One embedded IMU sensor will allow Dexmo to also output its orientation along x,y,z axis. Dexmo can be used for controlling a robotic hand, also providing you with a better sense of presence by simulating a force feedback when an object is hit.. With Dexmo F2, we can take VR to its next level, it adds a sense of touch to gaming and now you can now feel the size of a digital Object.

Dexmo F2 provide you with digital force feedback (on/off only) for your index finger and thumb that allows you to feel a digital object on top of hand motion capturing. We managed to combined all that into one single device. Dexmo F2 achieves feedback by braking the joint using our patent pending technology: a miniaturized joint gear-disk braking mechanism.

When a collision is detected(either by the collision detector in a program or by a pressure sensor in real life), a signal is sent back to the device,  then the actuators activate and brake the joint, the exoskeleton locks, preventing the finger from further bending inwards, thus creating a normal force on the user’s fingertip.”

So if you think Dexmo is something you could benefit from, visit the Kickstarter website via the link below now to make a pledge and help Dexmo become a reality and be one of the very first developers to own one.