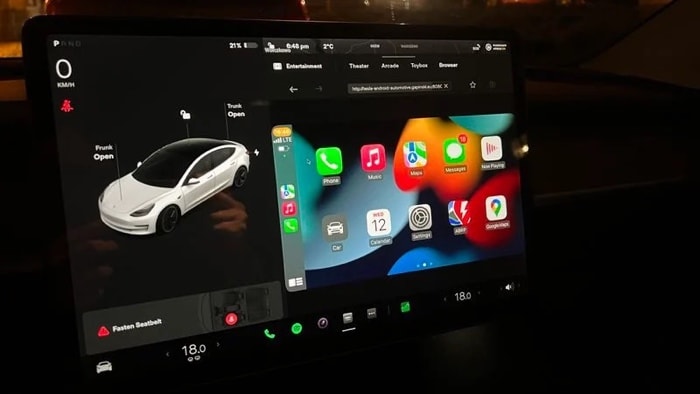 Tesla does not support Apple CarPlay and this is one of the most requested features that Tesla owners want in their car, as well as Apple Music.

Now one developer has managed to get Apple CarPkay working in his Tesla, Michał Gapiński shared a video on Twitter of the software working in the vehicle,

He used Tesla’s in-car browser to get CarPlay, Apple Maps, and even Apple Music running in the car, you can see it in action in the tweet below.

Steering wheel controls + current state of #teslaCarPlay on video. Next step is to improve Wi-Fi connection, the stream is 2x smoother when viewed on my laptop pic.twitter.com/0wFFUQQPkx

This was done using a custom build of Google’s Android running on a Raspberry Pi with an LTE modem and also a WiFi access point,the in-car browser connects to the Raspberry Pi and then displays the CarPlay interface, it certainly looks interesting from the video. Thi

The project is apparently in the early stages at the moment and the developer plans to release it once more work has been done on it. Maybe Elon Musk should hire him to implement CarPlay in tesla vehicles.