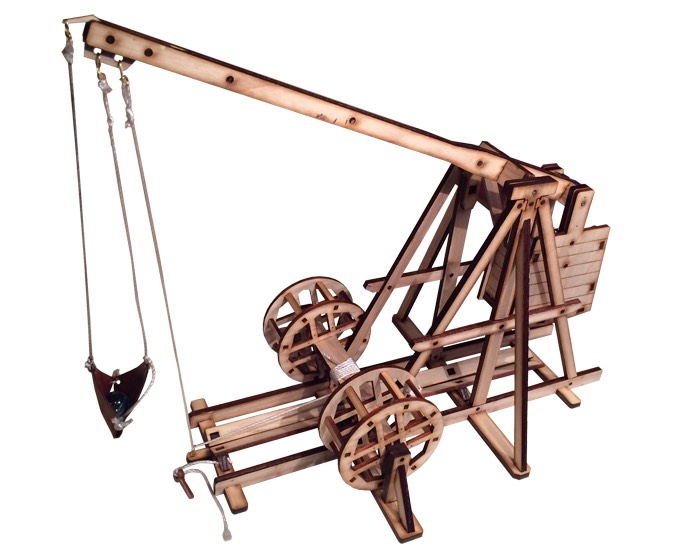 Anyone who has fancied owning their very own medieval trebuchet may be interested in a new kit that has launched over on the Kickstarter crowdfunding website starting at just $29, allowing you to build your very own desktop trebuchet.

Designed by Kerwin Lumpkins the desktop trebuchet is a laser cut wooden kit that is capable of hurling gumballs 50ft at your enemies once constructed. Watch the video below to learn more about this awesome medieval addition to your desktop arsenal.

“There are trebuchet model kits out there now.  Most are less expensive than my Desktop Trebuchet kit, but with good reason.  They typically are rickety looking things, made to be low cost.   I understand this and don’t for a moment criticize the companies that make them.

There are people who want a kit that they can build themselves or with their kids, learn some principles, have some fun and want to do it for as little cost as possible. I set out to reproduce a trebuchet at scale size. I had several goals. I wanted a model that worked, and worked well. And also looked good, made with quality materials.

My Desktop Trebuchet has a different standard. It’s solid and it works. Really works.  I have bought those inexpensive kits and assembled them and fired and got ranges on the order of twelve feet (about 3 meters).  Come on.  Really?  Twelve feet?  I look at it like this.

A desktop sized trebuchet is a scale of about 1/30’th.  Twelve feet at that scale is about 360 feet (~110 meters).  Long bows could fire with accuracy from a besieged castle wall out to about 600 feet (200 m).  So if your trebuchet couldn’t throw farther than that, chances are the crew loading and firing it would end up as pin cushions.  So that says to me that a treb would need to throw a projectile at least 800 feet (240 m) which to scale would be 26 feet (8 meters).  And it needs to look cool.

It took a while to get all these points.  9 design versions later, I had a design that could throw a gumball (equivalent to a 1 foot diameter limestone projectile) at least 30 feet.  With more weight in the counterweight bucket, I have exceeded 50 feet gumball shots.”

For more information on the desktop trebuchet kit jump over to the Kickstarter website for details via the link below and make a pledge from $29 to be one of the very first to own and fire one.