Scientists sometimes look to nature for inspiration and for flying robots the likely model seems to be the lowly dragonfly. The research is being conducted by a team from Duke University in cooperation with another group from Howard Hughes Medical Institute. The aim is to better understand the intricacies of how the insect manages flight and from there possibly derive insights for designing future robotic airborne machines or vehicles. 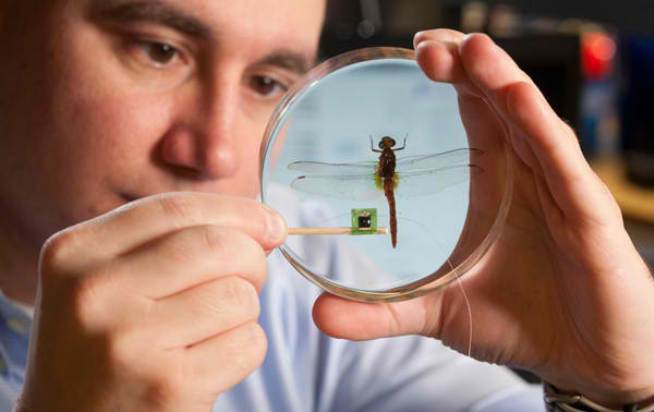 The researchers attach a microchip to the dragonfly and electrodes to its neurons. The sensors capture the insect’s neural signals and such data are then transmitted by the chip via Wi-Fi. The microchip weighs only one-tenth of the insect’s weight and doesn’t interfere with its movements. Coupled with high-speed video, the researchers are able to make internal and external observations.

Did you know that dragonflies catch their prey in mid-flight and can achieve speeds of almost 60 mph? Matt Reynolds, an electrical engineer from Duke working on the project, points out the dynamic range of the insect’s wings which provides it with high maneuverability and control. These exceptional aerodynamic qualities make the dragonfly an excellent subject for the study.