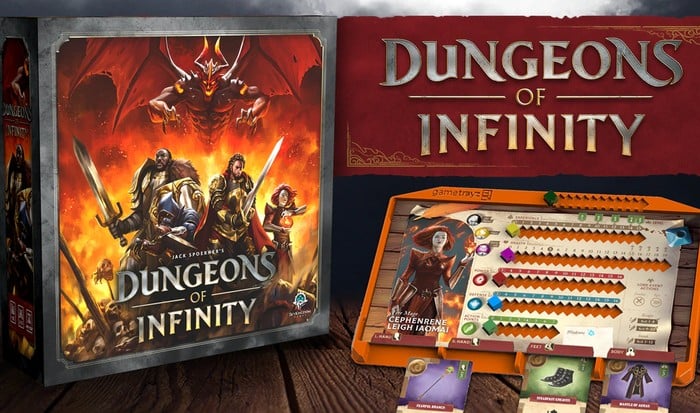 – 2 New Heroes – Lux Armiger, and Mirra Inmensas.
– 18 new dungeons that continue the exciting story of Lux Armiger’s Kingdom.
– Three new locations to explore – The Prison, The Cathedral, and The Tower. The new locations can be played standalone OR as part of the existing scenarios!
– 3 new Sentinel enemies with their own unique AI decks.
– 3 new Minion enemies with their own AI decks.
– Brand new ‘Enhancement Cards’ that give your characters powerful bonuses for completing the new locations.
– 2 new standalone scenarios.
– The base game Dungeons of Infinity is required to play Kingdom Cost.

“Dungeons of Infinity is a 1 to 5 player dungeon crawler that can be played solo, co-op or competitively. You can play through 30+ challenging dungeons in the campaign mode, or one of the 12 one-off scenarios! You can even create mini-campaigns by combining 3 scenarios for a more in-depth experience.”

Assuming that the funding campaign successfully raises its required pledge goal and the project completion progresses smoothly, worldwide shipping is expected to take place sometime around December 2022 with pledges starting from $39 for the expansion alone. To learn more about the project view the promotional video below.

“The Kingdom of Armiger – a land plagued with dark dungeons and even darker secrets. You are a hunter, tasked by King Armiger to plunge into the Mist and rid the land of evil. In your journey you will slay monstrous beasts, discover ancient treasure, and tread over the bones of the less fortunate. But beware of what hides in the Mist, lest the hunter becomes the hunted.”

For a complete list of all available early bird specials, stretch goals, extra media and technical specifications for the Dungeons of Infinity: Kingdom Cost game , jump over to the official crowd funding campaign page by following the link below.