Richard Tegelbeckers has created a new 3D printer called the DeltaTrix which has been specifically created to meet the requirements of the most demanding 3D model makers and designers.

The new DeltaTrix 3D Printer design is based on a linear Delta robot platform, however is different from previous generations of 3D delta printers, which were based on linear rods or aluminium extrusions. Watch the video after the jump to learn kore about the DeltaTrix 3D Printer. 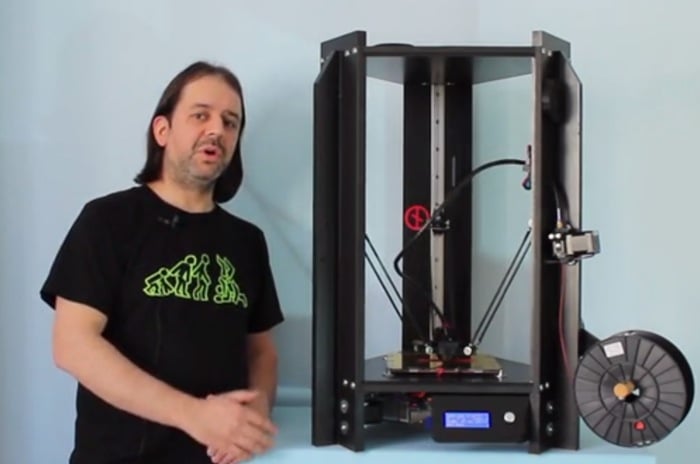 “We do not believe in short cuts when it comes to our designs. Being experienced in machine design, we know there is no substitute for quality components and sound engineering practice. On our machine there are no “DIY” bearings with unknown life expectancy, but proper items which have been developed and manufactured for their purpose. Although a cheaper option might seem to make sense in the short term, it often ends up being a more expensive option in the long run!

The design of the DeltaTrix 3D Printer is published on Instructables as an Open Source project. The currently published version should provide sufficient information to recreate one of our prototype machines. If you are eager to get your hands on a printer and you have the right skills/ tools, head over to Instructables now and get busy!

Alternatively, choose a kit or panel set from one of the Rewards in this Kickstarter and assemble the production version of our printer. Not confident assembling a kit? After shipping all of the Kickstarter rewards, we are aiming to provide kits and complete machines from our webstore (currently under construction, to go live after fulfilling the Kickstarter pledges).”